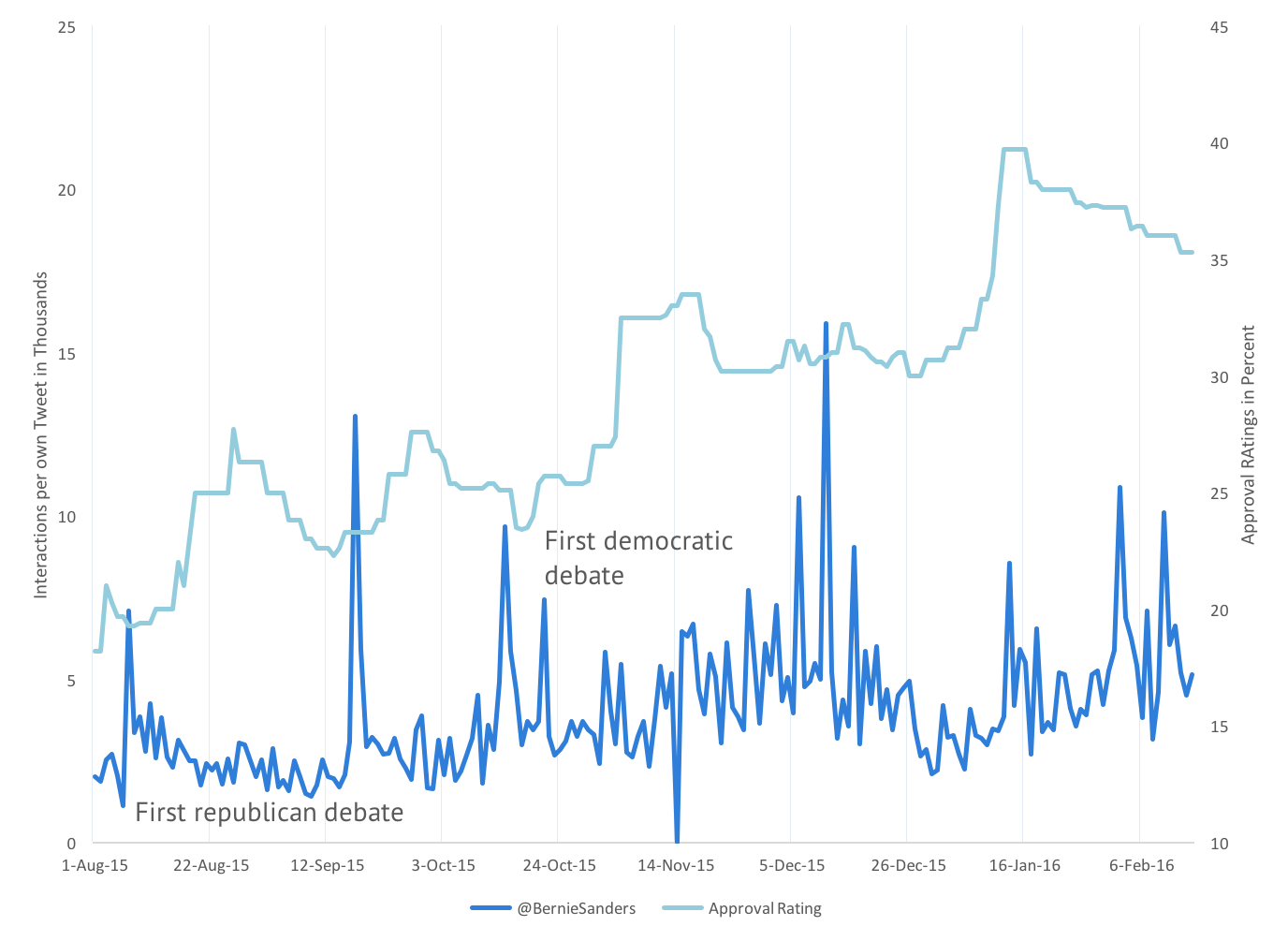 With Super Tuesday approaching, the run for presidency is picking up pace. In our last article on the US presidential elections in social media, we compared the social media performance of Vermont senator Bernie Sanders and billionaire Donald Trump. Here we found that for both, there is a strong correlation between the number of their followers and their approval ratings. This time, we want to explore another combination by comparing the two democratic candidates Bernie Sander and Hillary Clinton.

The former First Lady and Secretary of State, Hillary Clinton can look back into a long history in the Washington establishment. Bernie Sanders, the likable outsider who just recently entered the national political stage, personifies the anti-establishment by calling himself a democratic socialist. In 2008, Hillary Clinton lost against the young new-comer Barack Obama, but what about her campaign in 2016?

As of the February 15, Bernie Sanders could count 1,436,538 and Hillary Clinton 5,397,329 followers on Twitter. Just considering these numbers, the former First Lady would clearly be the winner. As in our last article on the US elections in social media, we will not only look at the followers but also at the average interactions per post that the two democratic contenders have reached. To explore possible effects on their popularity, all the stats will be compared with Clinton’s and Sanders’ approval ratings. The analysis will span a timeframe from August 2016 to mid-February 2016. 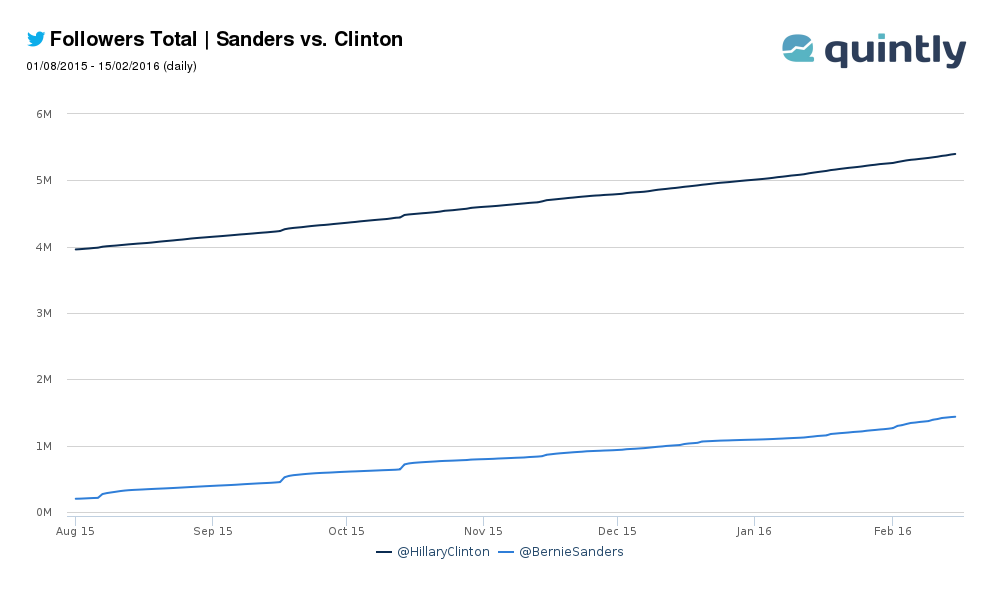 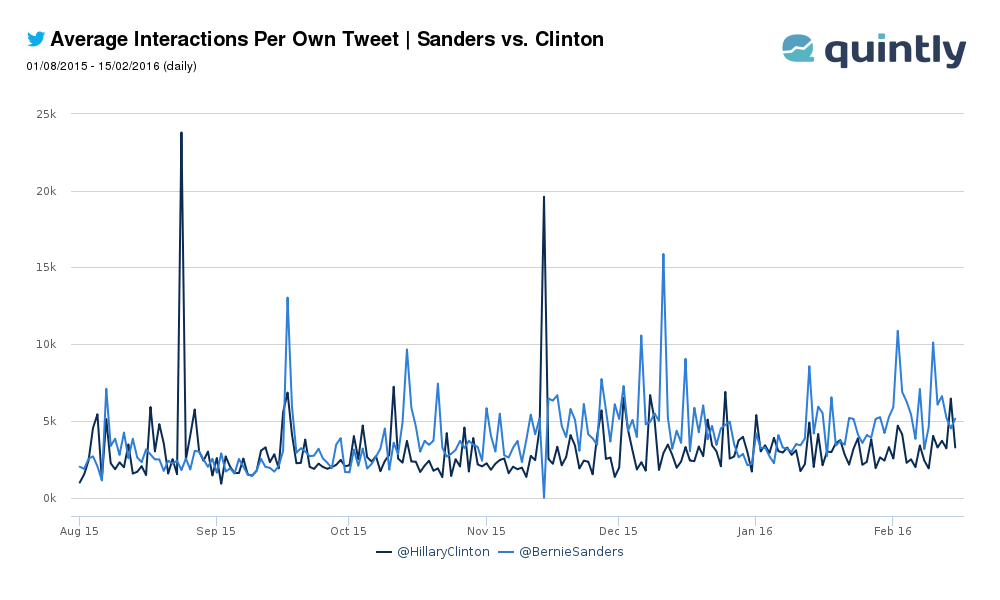 The number of followers is one of the most basic indicators for success in social media as it describes the current amount of people following a certain profile. Followers are so central as they define how many user can potentially be reached.

Let’s start with looking at Clinton’s performance on Twitter. At the beginning of the chosen period she could already count more followers than Bernie Sanders today. Currently, the former secretary of state is leading in the polls among the democratic candidates. While Sanders has an approval rating of 35.3%, Hillary Clinton is leading with 49.0%. Interestingly enough, while she is currently facing a downward trend in the polls, her follower growth keeps stable and rather steep which has been the case for the whole last year. The behavioral mechanisms behind this continuous growth remain to be explored. Nevertheless, it also shows here that follower numbers are event driven. We can make out small peaks right after the presidential election debates. A rather low correlation coefficient can already be anticipated by looking the graph. While the followers keep increasing for Hillary Clinton, there is an up and down regarding her approval ratings. Accordingly, we have a low r² = .34. 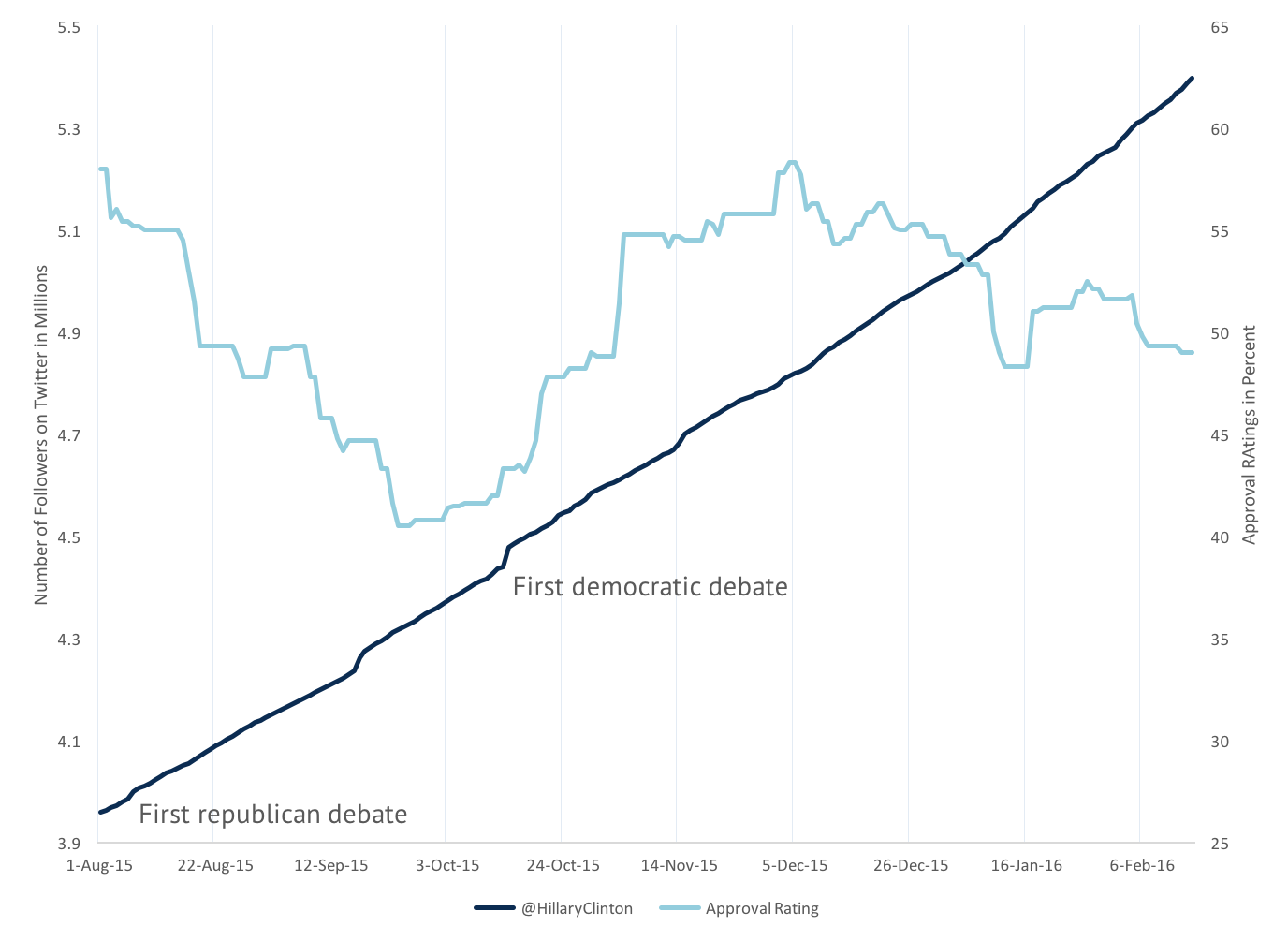 In our last post on the 2016 primaries, we have already taken a look at Bernie Sanders' performance. For him, there is a strong upwards trend for his approval rating and his follower count. Accordingly, we can measure a very strong correlation with r ² = .89. It is most interesting that Bernie Sanders was already able to gain lots of new followers through the presidential election debate of the republicans. It is clear that his appearance was followed by a great success for being a total newcomer on the national political stage.

A high number of followers and solid growth is key to any successful social media campaign, but another important fact is also the level of interaction a politician can achieve online. So the average interactions per tweet is another social media KPI that can be considered.

Here we can see for Hillary Clinton that there is only a negligible correlation coefficient for the former Secretary of State. This means that her approval ratings are widely out of sync with her amount of interactions. At this point, it is more interesting to compare Clinton to her contender Bernie Sanders. However, she could land two remarkable hits regarding interactions. On August 24 2015, she received almost 20,000 retweets for a post stating that no student should have to borrow money for tuition at a public college.

No student should have to borrow money to pay tuition at a public college.

Another high rate of engagement was cause by Clinton commemorating the Paris attacks in November 2015. If compare to her very high follower number though, her performance is rather weak. She could only achieve an average amount of interactions that is around 30% lower than Sanders'. 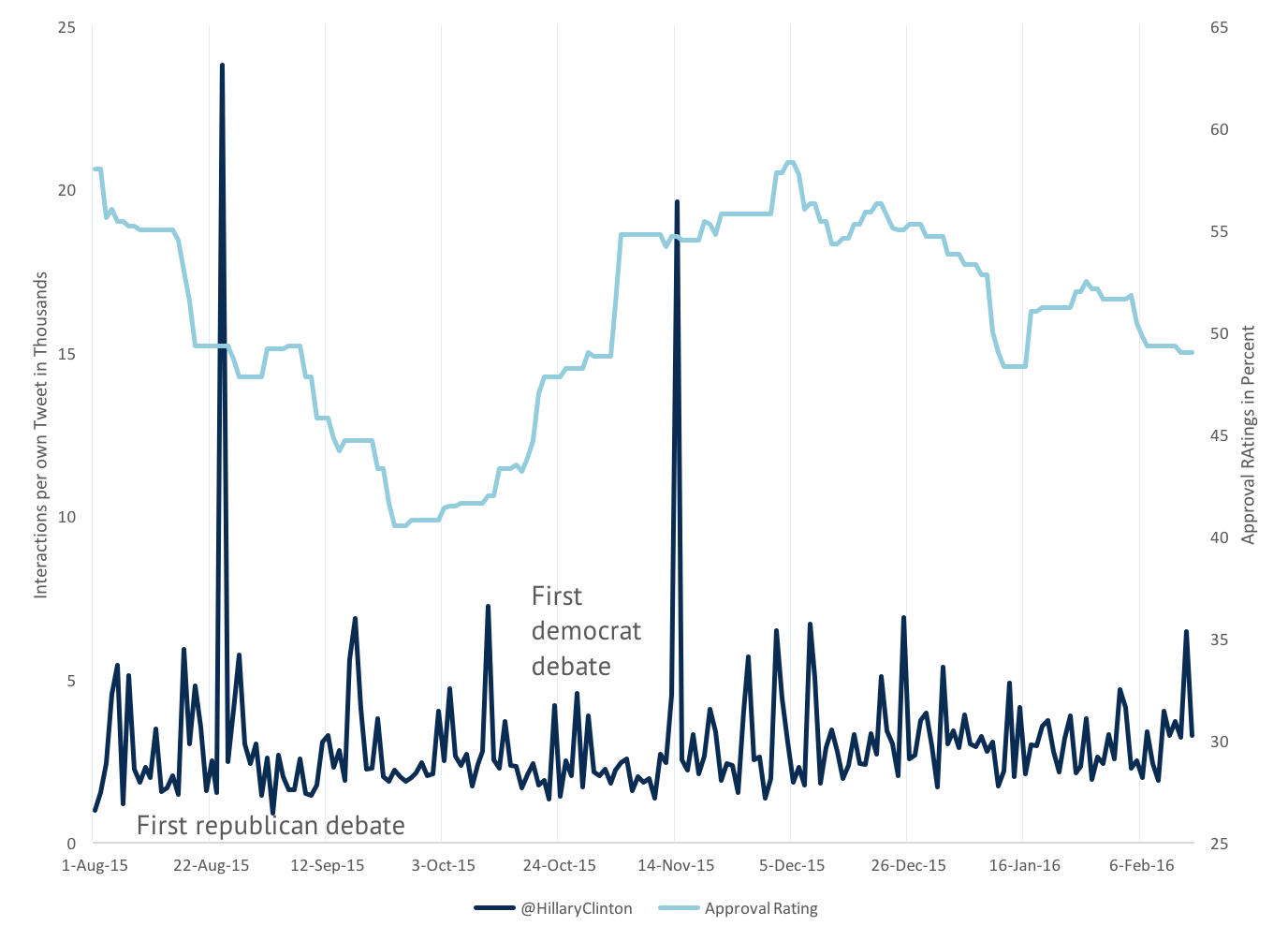 When we take a look at Bernie Sanders, we can see that there are especially two dates where tweets have lead to a high level of attention. The Vermont senator was able to gain many likes and retweets with two Tweets on September 17 2015, one on the women’s right of self-determination of their body and another containing a sarcastic comment on George W. Bush. On December 11, he posted that he did not enter politics to become the president but because he gives “a damn”. With this tweet he managed to get 44,355 likes. In comparison to Clinton he reached a remarkable number of people, even if she is leading with 4.6 times the amount of followers as Sanders. On average, Bernie Sanders has achieved more interactions since August 2015 than Hillary Clinton. What we can see here is that there seems to be peaks in the polls after a successful tweet, but it is overall much less in sync with the approval ratings compared to the number of followers. It is thus no surprise that the correlation has a much weaker value (r ² = .32) than compared to the correlation with his followers. The particularly successful tweets are rather one hit wonders than significantly influencing the approval ratings. Accordingly, the average interactions per post do not rise steeply with the polling results.

If we compare the follower counts of the former Secretary of State Hillary Clinton and Vermont senator Bernie Sanders, the former would clearly win. She could already gather more followers than Sanders has today in the beginning of August 2015. It is noteworthy how she is still able to maintain a relatively high steady growth while there does not seem to be any sign of a saturation effect. Within six month she could gain around one million new people following her in Twitter. However, her competitor could achieve approximately the same absolute increase. So what drives fan growth? Is it bound to being well known like Clinton or being a newcomer like Sanders? The same increase suggest that it might not be either of them but rather their common position as potential presidential candidates. Looking at the interactions, they seem not to be connected to the approval ratings. What is remarkable is the fact that Clinton, while having around 4.6 times more followers, can just come to 1.5 times more interactions on average for her most successful tweet compared to Sanders. This finding suggests that he seems to be on a better track than Clinton as he manages to engage relatively more people on Twitter.

What will be more fruitful in the end - fans or interactions? Discuss with us on Twitter using #quintlyPolitics or leave a comment below.

UPDATE: Check out our most recent article on the Republicans.