US Presidential Elections in Social Media: The Republicans - Trump as the clear Winner 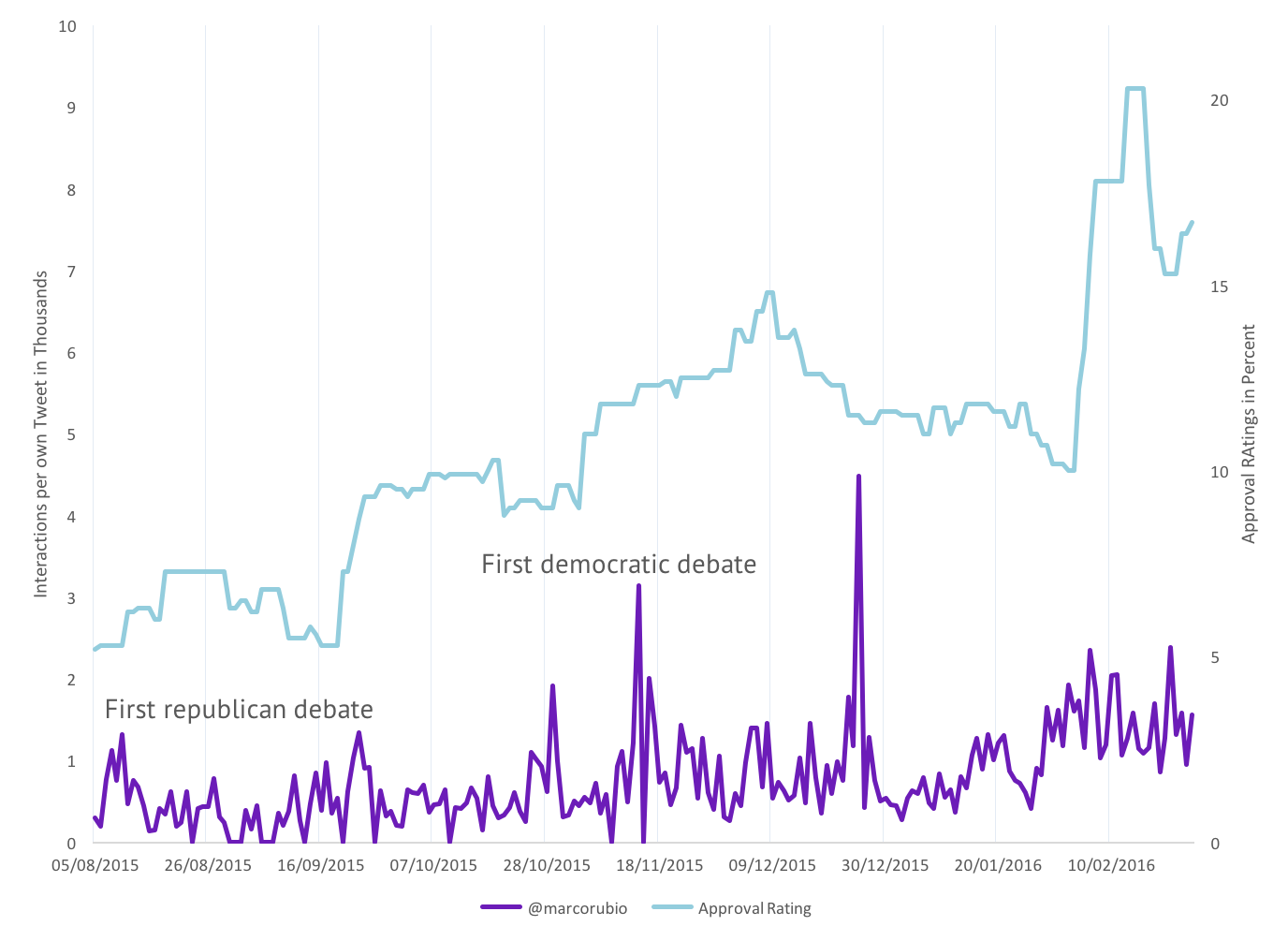 After Jeb Bush has left the race for presidency, the competition between the leading Republican candidates Donald Trump, Marco Rubio and Ted Cruz is gaining heat. However, it seems like Trump is already far ahead of his rivals - and in social media, things do not look much different.

In this article, we will track a time frame from early August 2015 until February 25, 2016. Donald Trump is currently at 6,362,808 followers on Twitter while his approval rating is 33.2%. Marco Rubio has a total of 1,212,711 followers with 16.7% in the polls and Ted Cruz achieved 843,895 people who were following his profile while he reached 20.3% in the approval ratings. What these plain numbers tell us is that the real estate billionaire is sitting in a quite comfortable position among his contenders. But let’s go a bit more into detail. In this article, we will explore the development of the three candidates regarding their follower numbers and the interactions their activities on Twitter caused. While doing so, we will always keep their approval ratings as a reference point in view. 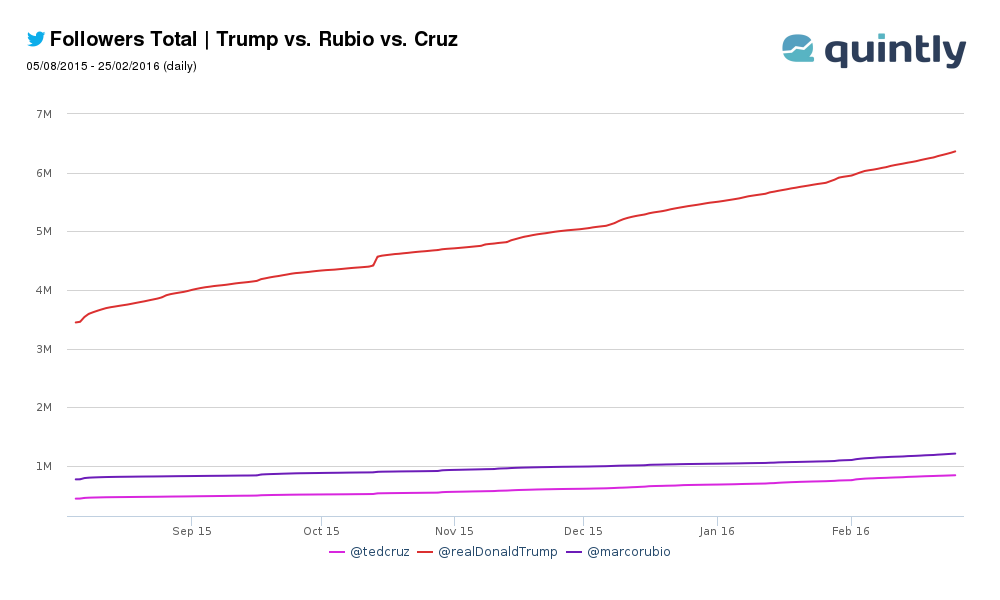 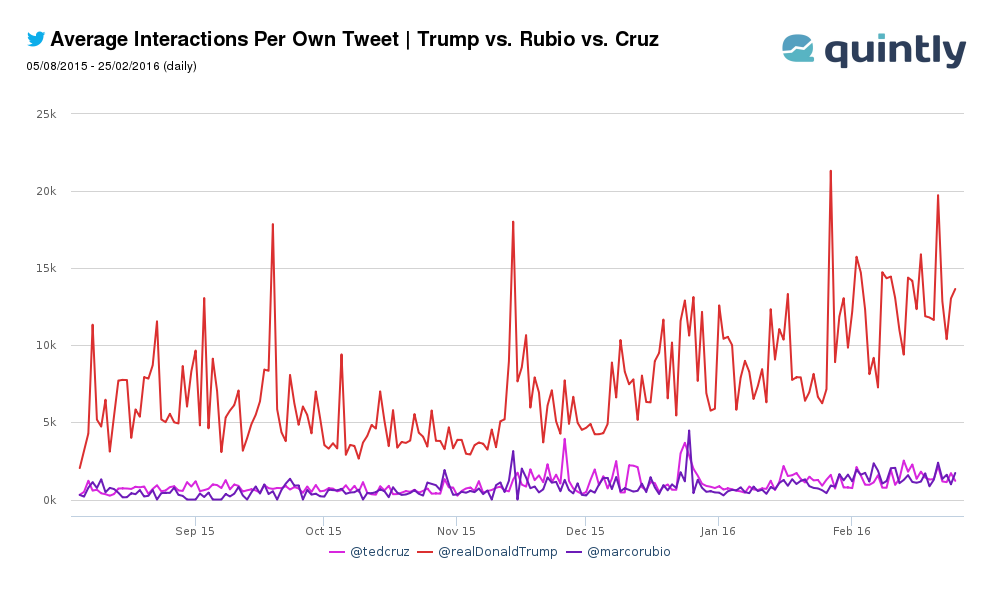 No election without voters, no Twitter profile without followers

So let’s look at their follower number first, as this is one of the most elemental social media KPIs when tracking profiles on any given network.

Donald Trump
To say that the billionaire from New York is a rather controversial figure in the race for presidency is no exaggeration. Not only but certainly his fame from former appearances in a reality TV format and his vigorous style of debating has drawn lots of attention to Trump. In August 2015, he already had significantly more followers than any of his two contenders has now. The first republican debate gave him a good boost and the same holds true for the days after the first Democratic debate. In less than seven months he won almost three million new Twitter followers. When running a correlation with his approval ratings, we can see that there is a strong positive tie (r² = .82) between the number of followers and his performance in the polls. So while he had a slight bump in early February 2016, he could recover is ratings and is sitting in a strong position. 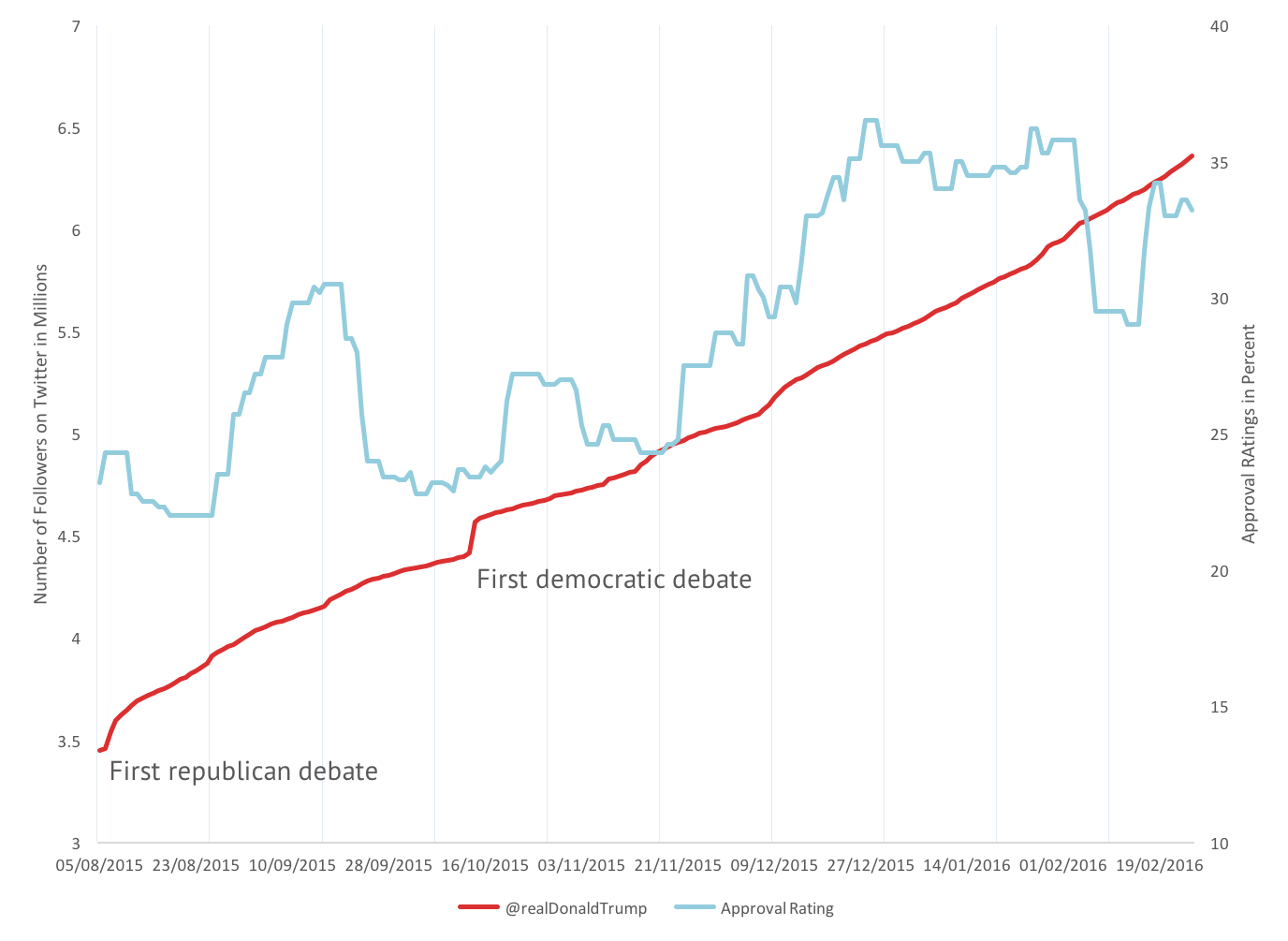 Marco Rubio
The Cuban American candidate Marco Rubio comes second when comparing the three contenders, but he is far off of Trump with more than five million less followers. After his first debate, Rubio could quickly gain around forty thousand new followers, however, his growth kept being rather low. From August 2015 until late January 2016, he was only able to win around 330,000 new people. What helped Rubio though was the first primary in Iowa, after which he could achieve a steeper fan growth that went hand in hand with a 10% increase for his approval ratings in the two weeks after. This effect for Rubio in February shows quite well how certain events can drive the follower number and the approval ratings. While his ratings went down again after mid February, his follower growth kept stable. Overall, both numbers mostly go hand in hand for him, as there is a strong positive correlation of r² = .84. 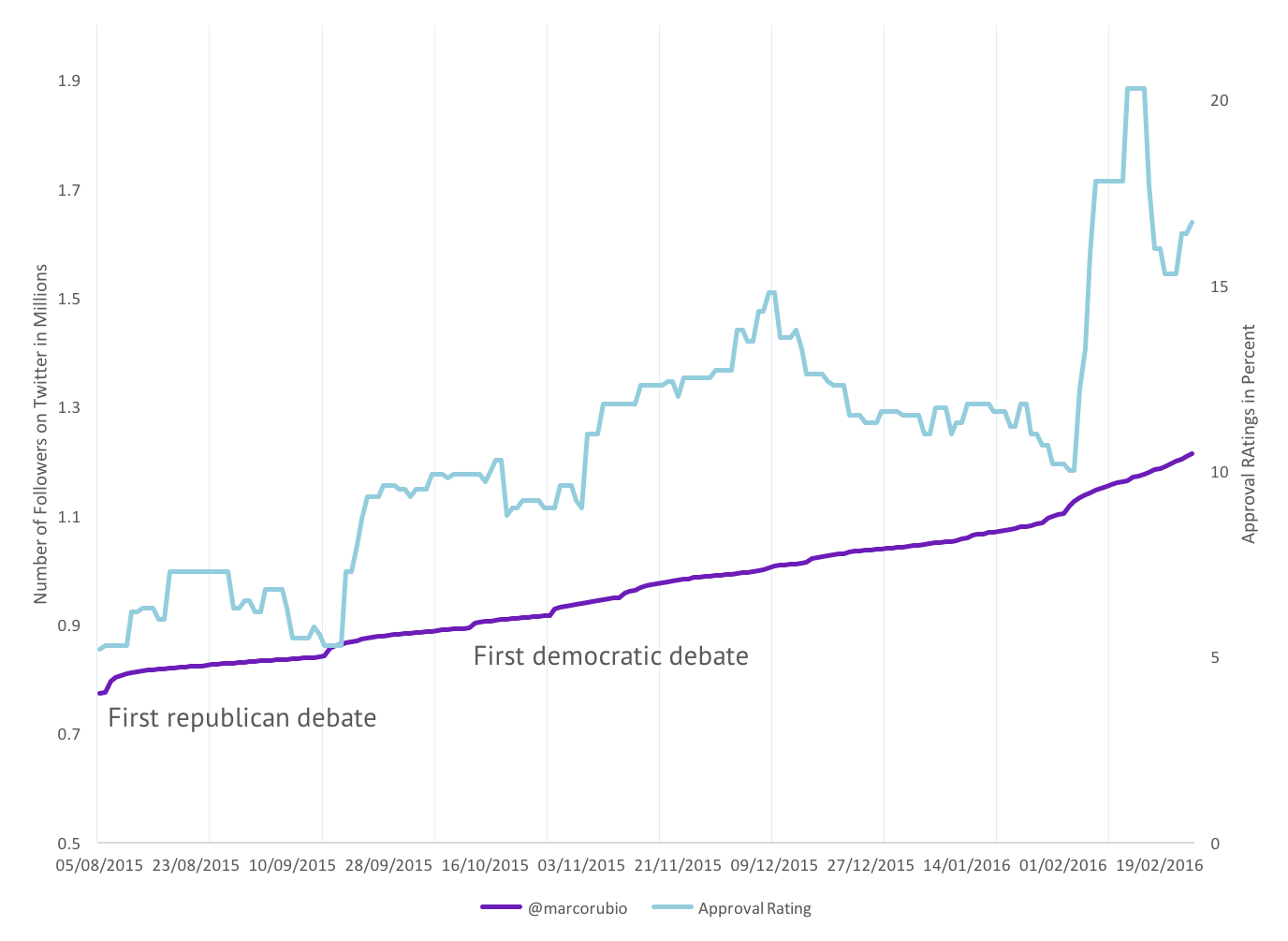 Ted Cruz
The conservative who was born in Canada comes in third when considering his follower count. Cruz started with around 450,000 followers in August 2015 and achieved around 400,000 new people until February 25, 2016. Accordingly, he gained a higher number than Rubio, but is still behind him in total. While the first republican debate also brought him some new followers, the first democratic debate has had a quite similar effect. It is interesting that we could so far observe for almost all the contenders that not only the debates of their own party helps them, but also the debate of the opposing party. What brought Cruz a bit of a change towards a steeper growth of his follower number was the third republican debate where he gained attention through his performance and his attack on the moderators. It was also after his point of time where his approval ratings started to rise significantly. From around 7% in late October 2015 he was able to get above 20% until late February 2016. Another boost in followers came to Cruz after he won the Iowa caucus. For him, the polls and the follower number went up in an almost parallel way, so the correlation between these figures is very strong for Cruz (r² = .96). 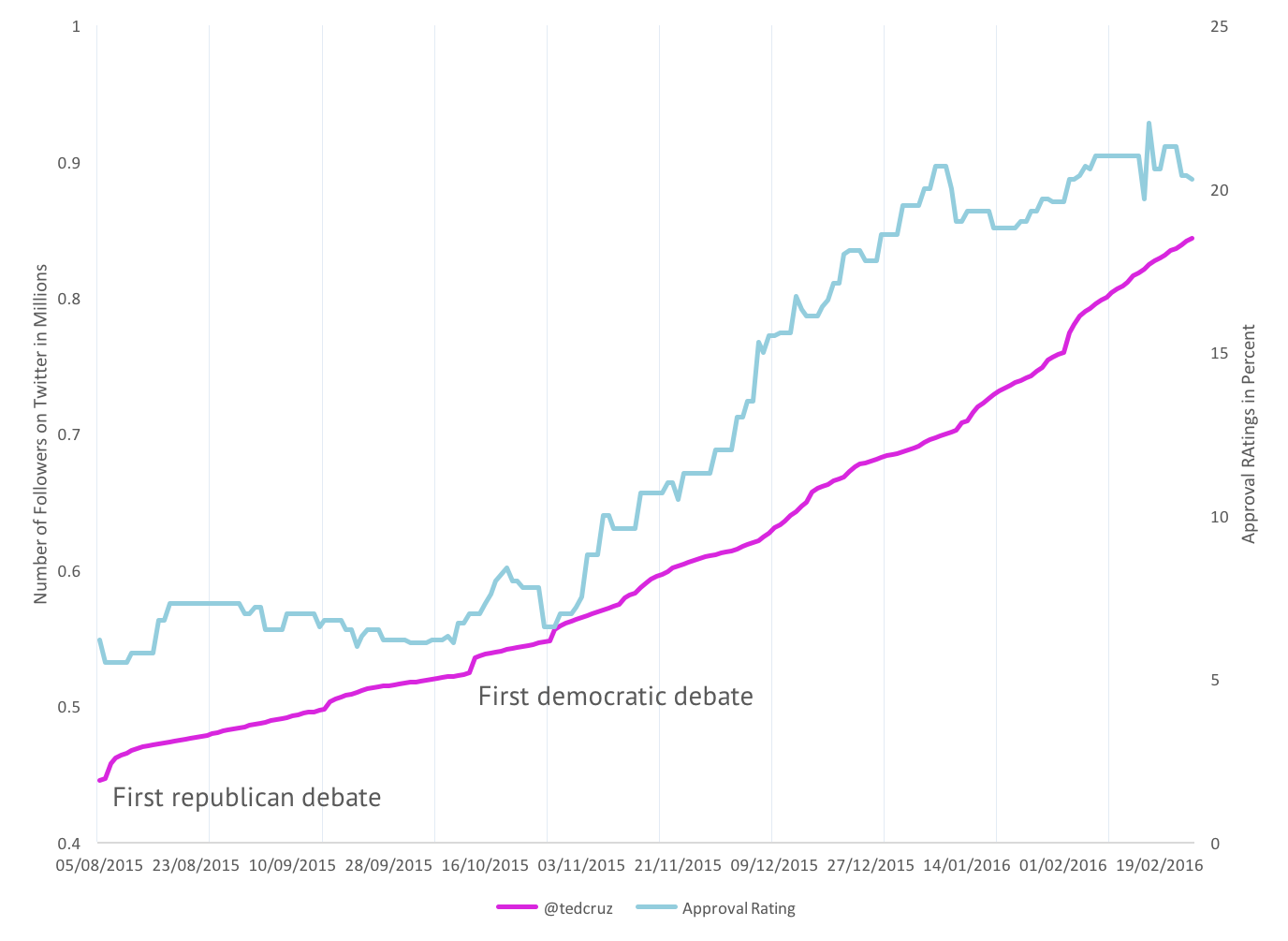 Attention in social media boils down to interactions

After taking a closer look at their followers, we will now turn to the average interactions Trump, Rubio and Cruz reached per own post.

Donald Trump
Trump does not only lead regarding the number of followers but also when looking at the average interactions. Within the observed time frame, he achieved some tweets that got an exceptional high level of attention. On September 19, 2015 a tweet saying that christians need more support in the US and around the world became a hit with almost 16,000 likes and over 8,000 retweets.Mid-November a tweet on the Paris attacks and one on bombing oil fields that are in the possession of ISIS spurred a high number of interactions. In late January 2016, several tweets by Trump on his feud with Fox News host Megyn Kelly got him a great number of likes and retweets. By looking at the chart, it is easy to see that he started to successfully increase his continuous level of interactions in November 2015.

Christians need support in our country (and around the world), their religious liberty is at stake! Obama has been horrible, I will be great

Marco Rubio
As expected, Rubio’s number of average interactions is much lower, not even reaching five thousand interactions on average for his most successful day. There were two points of time where he could achieve a peak. One was November 13, 2015 when the Paris attacks happened and Rubio posted that he was praying for the victims. The actual high point was on the 14th, where he also tweeted about his plans on how to prevent such acts of terrorism. His biggest hit were Christmas wishes with an average of around 4,500 interactions on December 25. It was after the Iowa caucus when interactions on his profile generally became more frequent.

The #ParisAttacks are a wake up call. This is a clash of civilizations. Either they win or we win. https://t.co/9Ydjxy8KCi

Ted Cruz
Regarding the number of followers, Cruz is coming last among the three main candidates of the republican party. However, concerning the amount of interactions, he was generally doing a bit better than Rubio in late Summer and early autumn of 2015. Cruz managed to maintain a higher background noise than Rubio by never having zero interactions on one day. Besides that, Cruz was relatively successful on Thanksgiving reminding people to say a prayer for the American troops. He furthermore got a boost in interactions for his Christmas greetings. With his victory in Iowa, the engagement on his profile is rising but it remains to be seen if he will be able to come anywhere faintly close to Trump at any later point.

Don't forget to say a prayer of Thanksgiving for our men and women in uniform spending the holiday away from home. pic.twitter.com/z2X86EFYwH 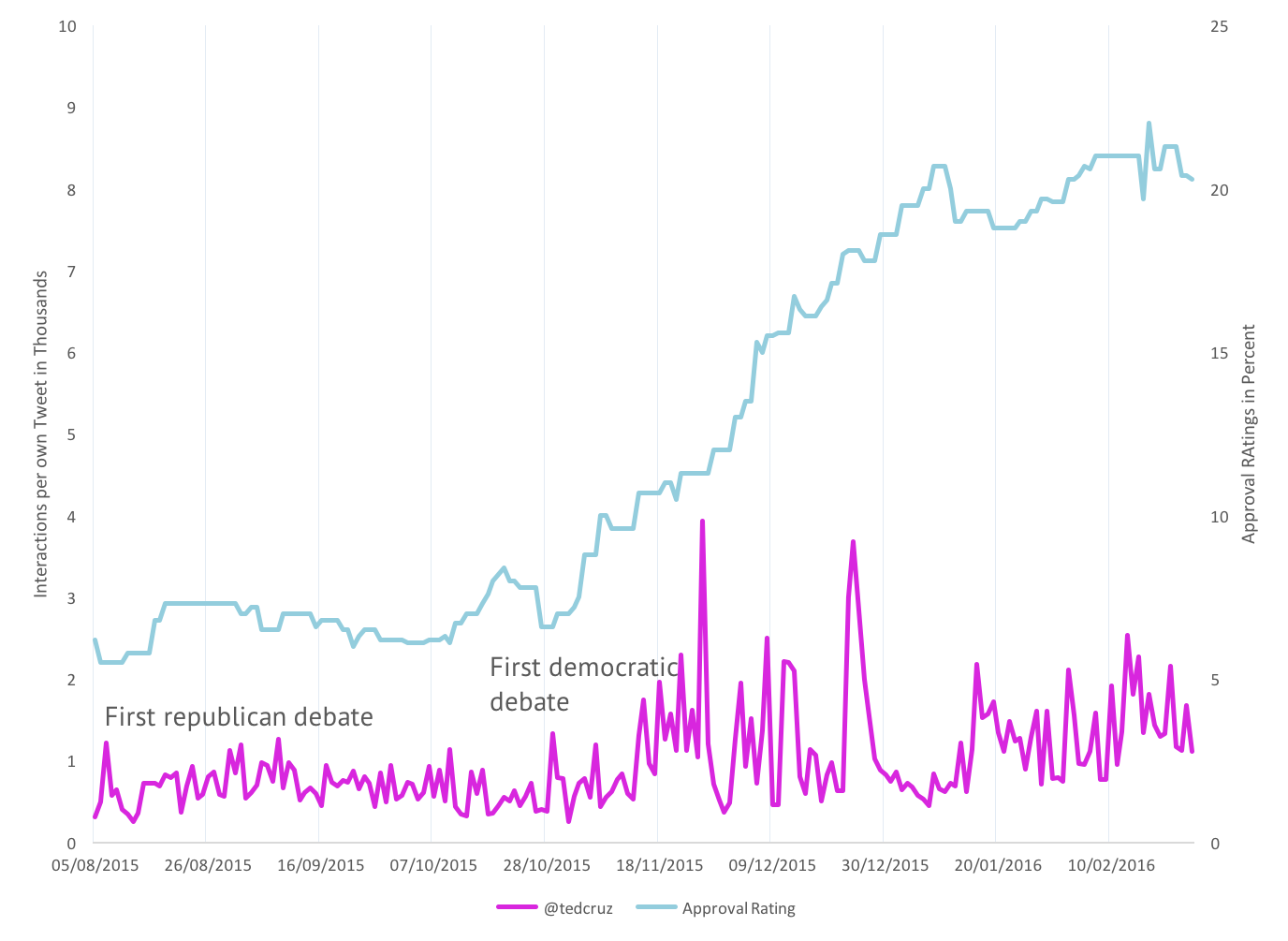 There can be no doubt that Donald Trump is currently winning the elections in social media: he has the most followers with a large lead over his contenders and can achieve much more interactions. So far, there is no one coming close to Trump. His two competitors Marco Rubio and Ted Cruz who are far behind him, do not show much of a difference in performance when being compared. While Rubio has roughly 370,000 more followers, the average interactions per own post on their profiles are quite similar in the first months of 2016.

What do you think? Is it already impossible for Cruz and Rubio to catch up on Trump? Join the discussion either here in the comments, on Facebook or on Twitter via #quintlypolitics.