US Presidential Elections in Social Media: Sanders vs. Trump - strong correlation between followers and ratings 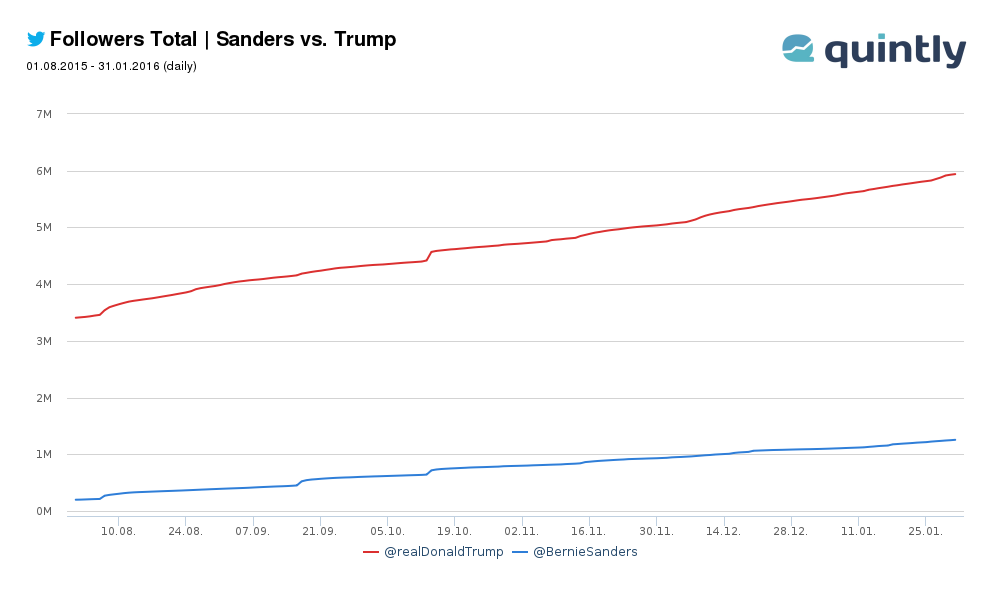 Remember when Obama was running for president in 2008? Back then, there was much attention to how well the rather young candidate used social media in his campaign. Today, a solid appearance on all relevant social media channels is expected from every politician. Nonetheless, the current contenders for becoming their party’s candidates take it to the next level, especially as the number of active social media users is much bigger today than it was back eight years ago. In the following article we compare social media data with approval ratings for the presidential elections in 2016.

The kings of social media

In the run for presidency, there are two contenders who have been getting lots of public attention regarding their activities in social networks: Billionaire Donald Trump and Vermont senator Bernie Sanders. As of the end of January 2016, Trump could reach 5,940,061 and Sanders 1,256,549 followers on Twitter. The amount of followers and attention that the two receive is quite remarkable. Nonetheless, there are some observers who question if their social media presence has a substantial effect on their success when the ballots get cast. This is why we want to dig a bit deeper and compare their rising number of followers with their recent ratings from election polls. For doing so, we will use the RealClearPolitics Average that is calculated on the results of different polls. We will also look at the average interactions per post as this social media KPI can help us understand the level of engagement that each of the candidates receives online. To show to what extent the two stats and the approval ratings are connected, we ran a correlation with them. By doing so, we found some interesting outcomes.

While Trump is ahead of Sanders regarding his overall number of followers, their respective approval ratings within their affiliated parties are quite close. While the republican businessman comes to 35.8% as of the end of January, the democratic senator could accumulate 37.3% in the polls for the presidential elections 2016.

For both there is a very strong positive correlation between the number of followers and the approval rating. While for Trump the correlation coefficient amounts to r² = .83, it amounts to r² = .89 for Sanders. So when the number of followers is rising, there is a high chance that the approval ratings will also go up. However, it must be noted that calculating the correlation coefficient does not tell us anything about causality, so in principle we can’t generally say whether higher ratings cause more followers or more followers lead to higher ratings.

A closer look at the graphs will, however, help us determine possible causal links. Let’s first look at the one from Sanders. Notice the first increase in followers in early August 2015? It marks the first presidential election debate of the republicans. Even if this did not include Bernie Sanders as he is a democrat, this clearly also directed attention at the non-republican contenders. With a slight delay, you can make out a rather steep increase in Sanders’ approval ratings. The same holds true, for example, for the first democratic presidential debate in mid-October when Sanders was also able to gain many new followers. 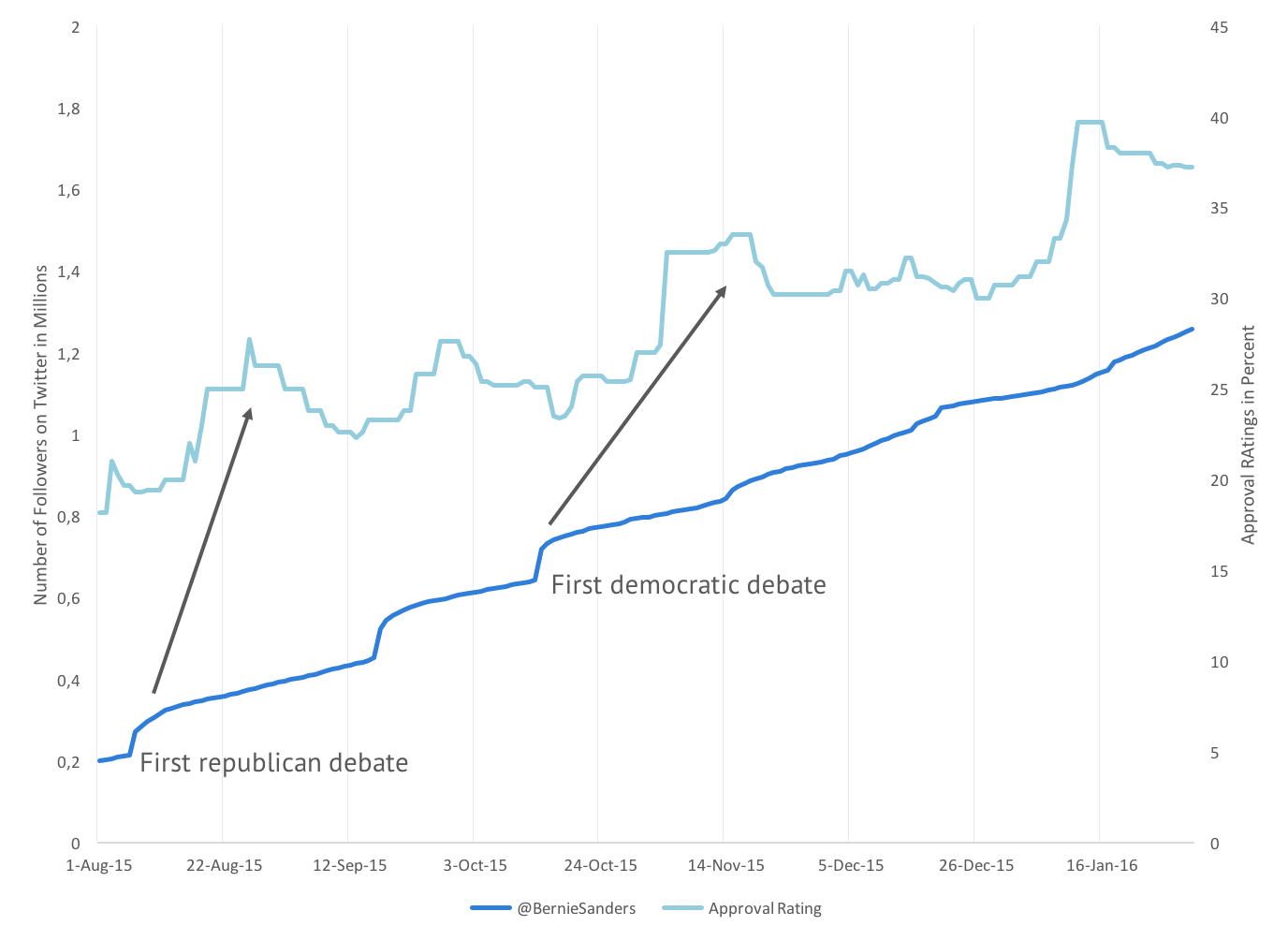 If we look at Donald Trump’s figure, the outcome is a bit different. Taking the first republican  debate into account, he was also able to gain many new followers and subsequently had a peak in his ratings. However, it took around one week for Sanders to increase his approval rates, while it took almost three weeks for Trump to gain in the polls. After the democratic debate Trump also managed to get more followers and within a week his approval ratings went up. 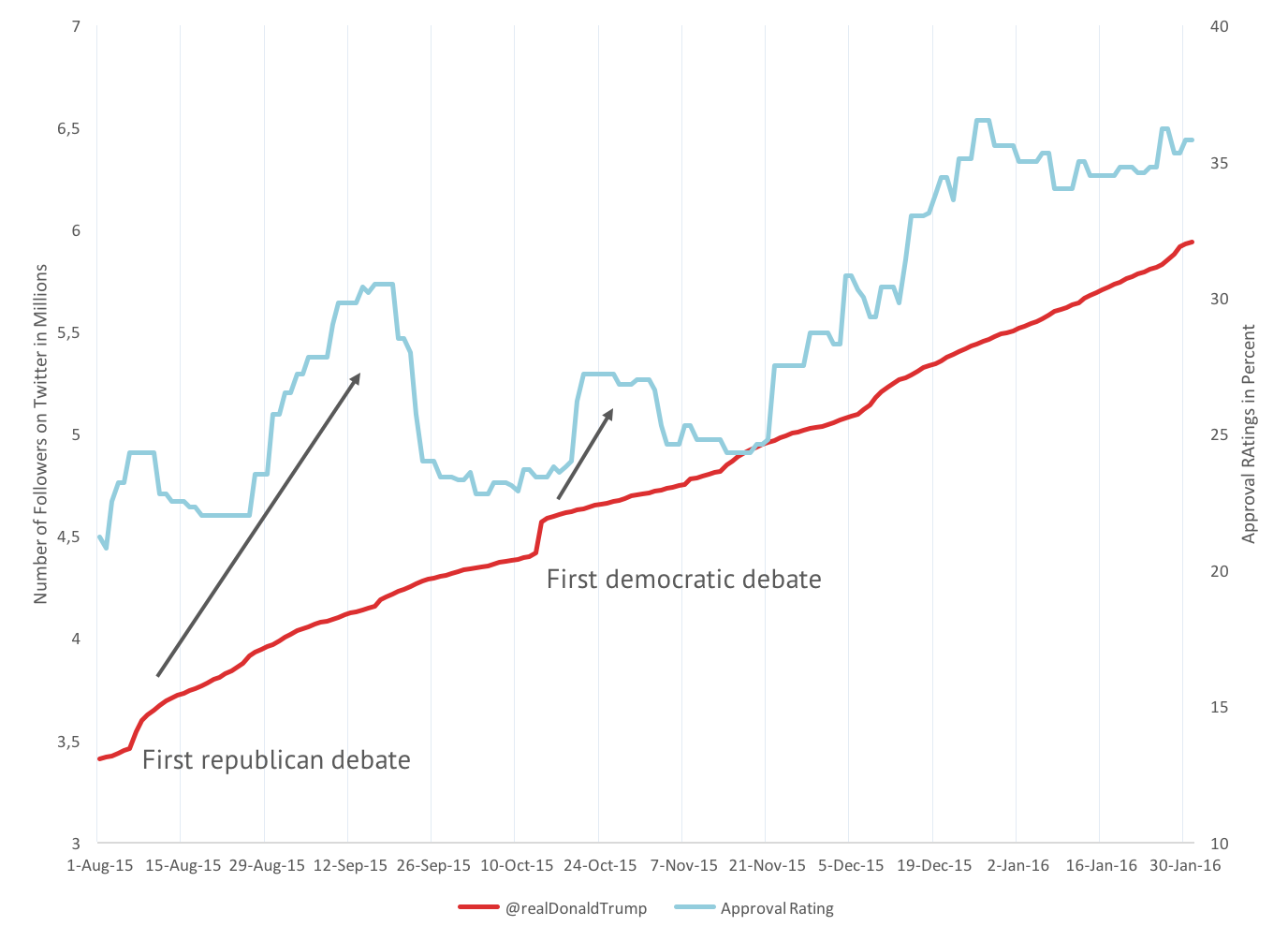 Besides the number of followers, we want to take a look at the average interactions per tweet for both potential presidential candidates. If we consider Bernie Sanders, we can see that there are several dates where tweets have spurred a great deal of attention. For example, this can be observed in the beginning of October 2016, right after the first republican debate. Another tweet with a high number of interactions can be seen mid-September and another one mid-December. What we can see here is that there seems to be peaks in the polls after a successful tweet, but it is overall much less in sync with the approval ratings compared to the number of followers. It is thus no surprise that the correlation has a much weaker value (r² = .32) than compared to the correlation with the followers. The engagement is thus not increasing a lot with overall rising ratings.

Looking at the figure of Donald Trump, the case seems a bit clearer than with Bernie Sanders. He managed to create some well regarded tweets mid-September or mid-November and late December. If compared to the ratings, they seem to mostly come after a peak in the polls. So in this case it could be assumed that the ratings influence engagement on Twitter. However, this assumption is hard to validate and would at least demand further qualitative research into specific tweets. The correlation coefficient with r ² =  .44 is in this case higher than for Sanders, but still not strong. It can also be observed in the graph that there is a slight trend towards rising ratings with an increase of interactions. 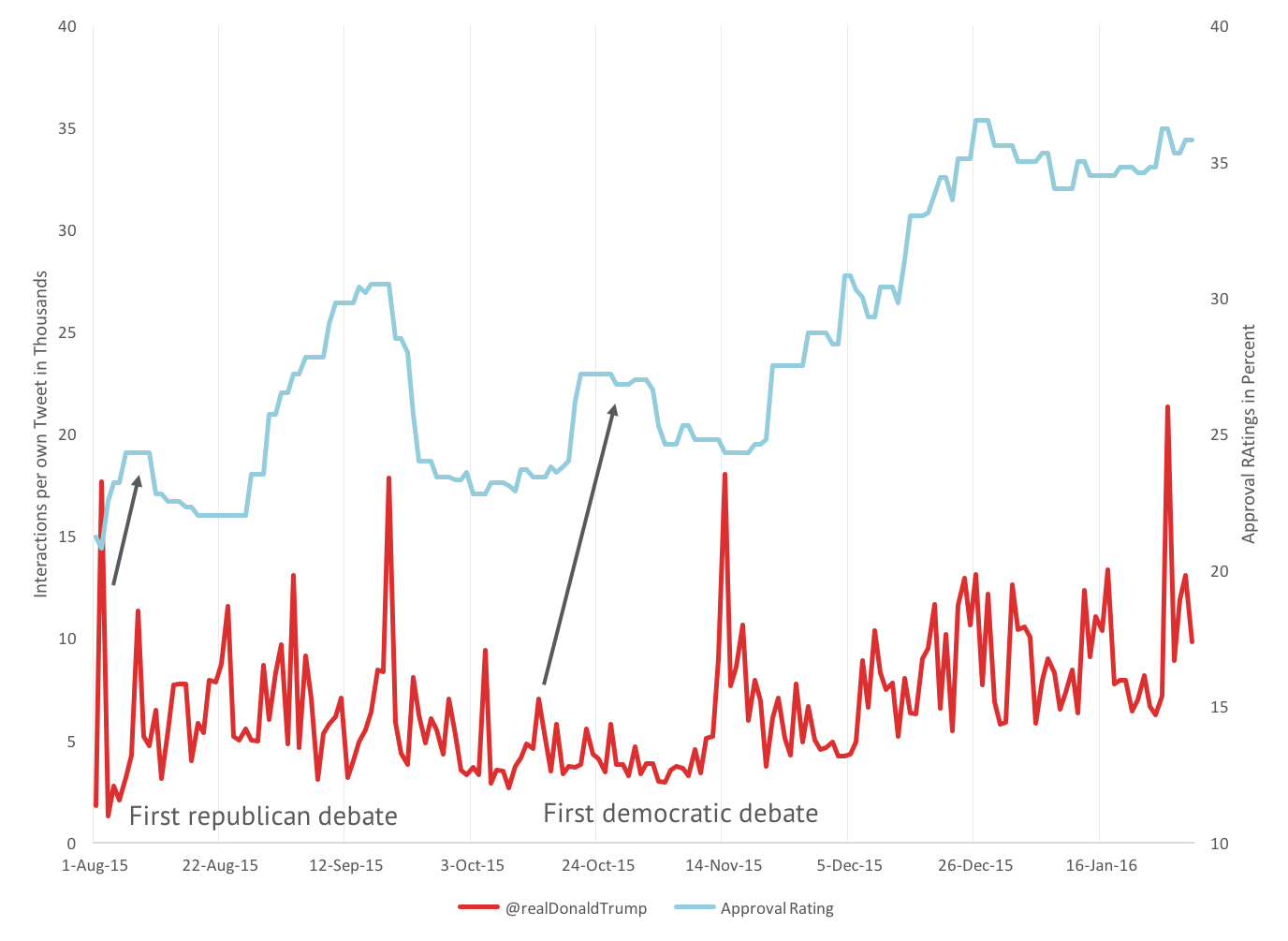 We have seen that the number of followers and the approval ratings go hand in hand. There is a strong positive correlation. After every peak in the amount of followers, there is a peak in the ratings. So it could be assumed that social media is at least one aspect that is positively influencing the approval ratings. Regarding the time, the reaction through the peaks does vary between around one and three weeks. What is most striking is that the debates in general lead to a rising number of followers for each contender. It therefore seems like they are also the driving force that push the approval ratings while social media is again amplifying that effect.

As for the average interactions per tweet, the situation is a bit different. There is an at least moderate positive correlation between the interactions and the approval, however, it is weaker than for the followers. It is furthermore a bit harder to say whether the interactions influence the ratings or the other way around. Nonetheless, it is remarkable that Bernie Sanders can also create as much buzz as he does while having significantly less followers than Donald Trump and while also using much less of a populist and polarizing style.

As dependencies between social and approval ratings is a controversial topic and there probably is no right or wrong, feel free to join the discussion on Twitter using #quintlyPolitics or leave a comment below.