After we received great feedback on our Instagram study in which we were able to identify that interaction rates are up to ten times higher than on Facebook, we wanted to reveal which networks seem to be relevant for companies and brands all over the world. In this analysis, we looked at how over 50,000 quintly users use the platform to track their social media presences. The study is split into 15 countries, as we identified variations between different regions.

The analysis does not only reveal the business-related relevance for a social network specifically in each country but also the eagerness analyzing it, which is one step beyond interest and relevance. Using these numbers as a foundation, we can assume which networks are relevant for marketers and which are not highly relevant for social strategies in companies. This may have many factors such as a lack of reach or (still) low relevance for businesses.

Interesting differences are noticeable, for example, that Facebook is tracked the most in France, whereas 30 percentage points less track the mother of all networks in Indonesia. In the Southeast-Asian island state, Instagram seems to be a “big thing” with 18% (Average 10%). In Argentina, just Facebook and Twitter seem to be important for the analyzed companies. 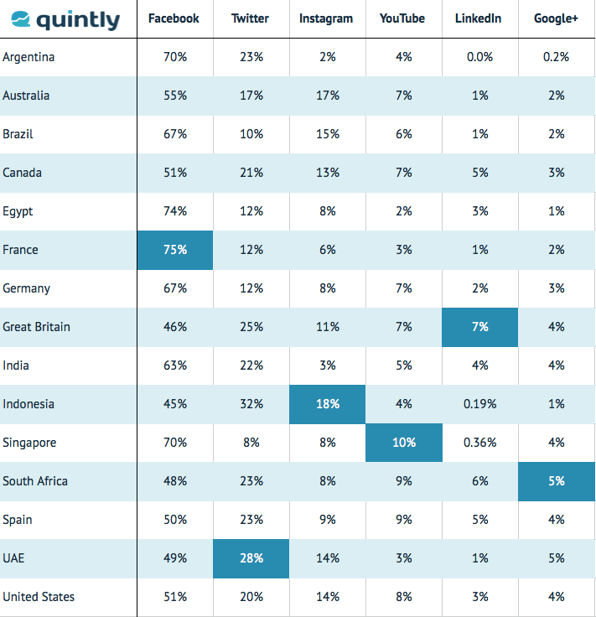 By visualizing the table in the following chart, it gets clear that companies rely heavily on Facebook and perhaps too little on Instagram, especially considering the high interaction rates on the photo-sharing platform. Thus, brands might miss opportunities in reaching their target audience when focussing on one network, which is Facebook. The potential of visual marketing with pictures or videos is highly controversial but does not seem to be utilized by the majority. As a recent article on Harvard Business Review explains, multi-channel strategies can leverage many possibilities for companies, but have to be chosen wisely.

By using the listening tool Brandwatch, we were able to identify even more significant results. We found out that since June 2014 Twitter Analytics has achieved a rapid but sustainable increase in mentions, after they introduced their analytics.twitter.com. Combined with our results presented above, these numbers are showing the increased relevance for users, on a global scale. As Twitter is flattening the graph, find one screenshot that includes "Twitter Analytics" mentions and one which does not.

In the future we should have an eye on developments as a rise similar to the above might be starting for Instagram now.

If you have any questions, or you would like to receive the network distribution numbers for a country you are marketing to, just send us a tweet to @quintly.