Digital Campaigning in 2017 - The General Election on Social Media 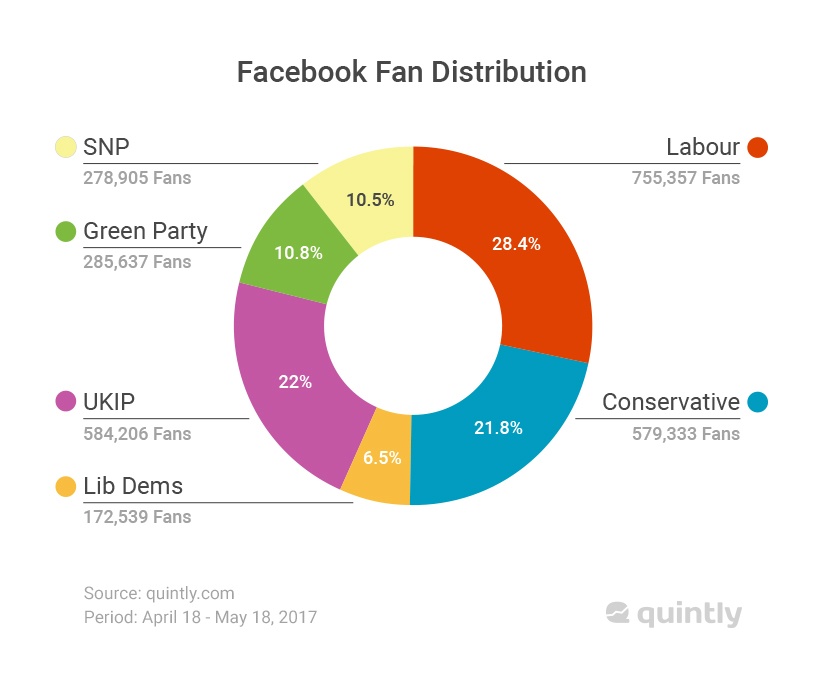 Theresa May suddenly announced a snap general election for 8 June 2017. This was not only surprising for the media but also for the English population because there was no general election planned until 2020. This sudden change also took us at quintly by surprise, and that is why we took the chance to analyse the upcoming general election on social media. Since we already examined the US elections in 2016, we decided to take a look at the social media presence of the political landscape in the United Kingdom.

Examined were: the distribution of Facebook fans among the parties, the growth of fans and followers since the announcement of the election and the usage of sponsored posts during this crucial digital election campaign.

In total, the analysed political parties had 2,655,977 Facebook fans. The biggest piece of the pie belongs to the Labour party with 28.4% (755,357 fans). They have the largest amount of fans on the social network. Surprisingly, Theresa May’s Conservative party with 21.8% (579,333), does not have the second most fans. The second strongest party is actually the UK Independence Party (UKIP) at 22% (584,206). The populist political party seems to attract a lot of people with their agenda on Facebook. An interesting takeaway here: UKIP was ahead of the Labour party until April 23rd in terms of Facebook fans, but were overcome by Jeremy Corbyn’s party the day after. The numbers for the other parties can be seen in the illustration below.

The most interesting thing in this relation is the rise of fans for the Labour party. They chalked up 213,780 new fans since the 18 April which is an increase of 39.5%. Particular huge dates of attraction were the 22 April with 4,452 new Facebook fans, and the 26 April with 11,399 new fans. No other political party gained more fans on either of the particular dates or in the whole analysed period.

For comparison, a look at Twitter shows a different scenario. The development over the past couple of days doesn’t show a significant change, neither in increase nor decrease of Twitter followers. Simply said, parties gained followers since the middle of April. The biggest gain was detected for the Labour party with 24,903 new followers - that’s a growth of 6.5%. 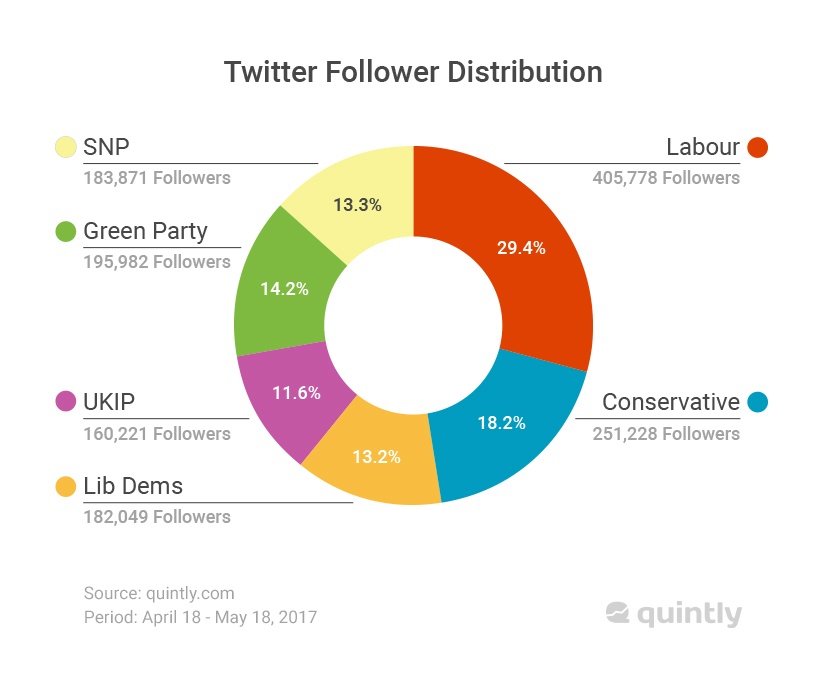 Whereas UKIP has the second strongest fan base on Facebook, the Independence Party has the least amount of Twitter followers among the parties. 160,000 followers is a really good number, but does not come close to their strong presence on Facebook. This is an indication that Facebook is much more attractive for their supporters - and people that are interested in the party.

Analysing the mentions that the parties received on Twitter (a mention is every tweet that includes the Twitter-handle of the specific party, this also includes retweets and replies), we discovered some interesting Insights. For example, the Labour party and the Conservatives are more likely to be mentioned by Twitter users than the other parties. Nearly 158,000 mentions for Labour, and 115,000 for the Tories. In comparison, UKIP got 4.5x fewer mentions on the microblogging platform. This is an interesting indication that Twitter users are less likely to interact with UKIP on Twitter than on Facebook.

63% of Theresa May’s fans are from the UK

Stepping aside from the political parties, let’s take a look at what is happening on the personal accounts of the party leaders.

Jeremy Corbyn seems to be the favoured among users on both Facebook and Twitter. On both networks, he nearly reaches 1 million fans/followers, and has almost 3x as many fans as Theresa May - who has the second most fans on Facebook. Looking at Twitter, it is apparent that Sturgeon has a strong followership but is not close to Corbyn in terms of followers.

Looking at the post level of the profiles, we also see a dominance in terms of interactions for Jeremy Corbyn. Users interacted over 110,000 times with his post when he commented on May’s Facebook Live with ITV news. Additional, the video already has over 3.6 million views.

Similar to the case with fans/followers, the world also looks a bit different on Twitter for interactions. Twitter does not offer the possibility to express your feelings beyond pushing the “like” button the way Facebook does. There, you have the ability to use not only the “like”, but other reactions as well. In this case we are looking at the tweet with the most retweets.

Lucas’ urge to give 16 and 17 year olds a vote for the general election was the tweet with the most retweets within the last month. This was a huge statement by the co-leader of the Greens to include younger voters in the process of voting.

Just urged the Prime Ministers to give 16/17 year olds a vote on June 8th. @AngusRobertson agreed. RT if you do too. pic.twitter.com/0UJ98561dr

On this note, we want to include a few more interesting findings on the fan demographics of the political figures. Therefore, we took a look at the origin of the Facebook fans of the party leaders. What we found is that 63% of Theresa May’s, 76.8% Corbyn’s, 83.7% Farron’s, 88.2% Lucas, 85.5% Nuttall’s and 80.2% Sturgeon’s Facebook fans are from the United Kingdom. While these numbers are high, it means there is still a good amount of fans outside of the UK, which is interesting considering the topic.

This could have many reasons, some being the worldwide media attraction of the election or the fact that Britain has a significant amount of expats spread over the globe. The assumption that fans were bought could be theoretically possible, but since there is no proof of this, we do not regard it as a possibility why politicians have such diverse global fanbase.

As sponsored posting on Facebook remains rarely untouched by political parties - an analysis showed that only 13% of all Facebook posts are sponsored - that comes as a surprise because this way of communicating has a huge potential for you to reach your target audience. Only one of the analysed parties made use of the sponsored post function within Facebook. 9 posts by Labour were sponsored out of 207 posts - that is a share of 4.35%.

But that does not mean that the parties do not advertise their content at all. A study published by the London School of Economics’ Media Policy Unit discovered that there is a focus on online ads since they are less cost intensive than those published in newspapers. In fact, are the parties relying on specific sort of online advertisement, namely the use of dark posts. Through dark posts do the parties have the chance to show nonpublic paid posts to selected users. This gives them the opportunity to tailor the posts to a specific audience - based on personal information such as demographics and interest - which is eventually only visible to the targeted group.

The final decision will be made at the polling station

The elections will not be decided on social media, but the digital sphere provides a new way of communicating and opens possibilities for campaigning with potential voters - especially young voters. Therefore, it is a close look at the behaviour of the political parties as they provide an indication of potential outcomes of the election. In particular, keep in mind that advertised content had a huge influence on the outcome of the US elections and the EU referendum. Parties are now focusing more and more on targeting content to reach and especially to win over more undecided voters. That said, the final decision will be made somewhere else, specifically at the ballot boxes across the United Kingdom on 8 June.