How Much is Too Much Hashtags? We Crunched the Numbers 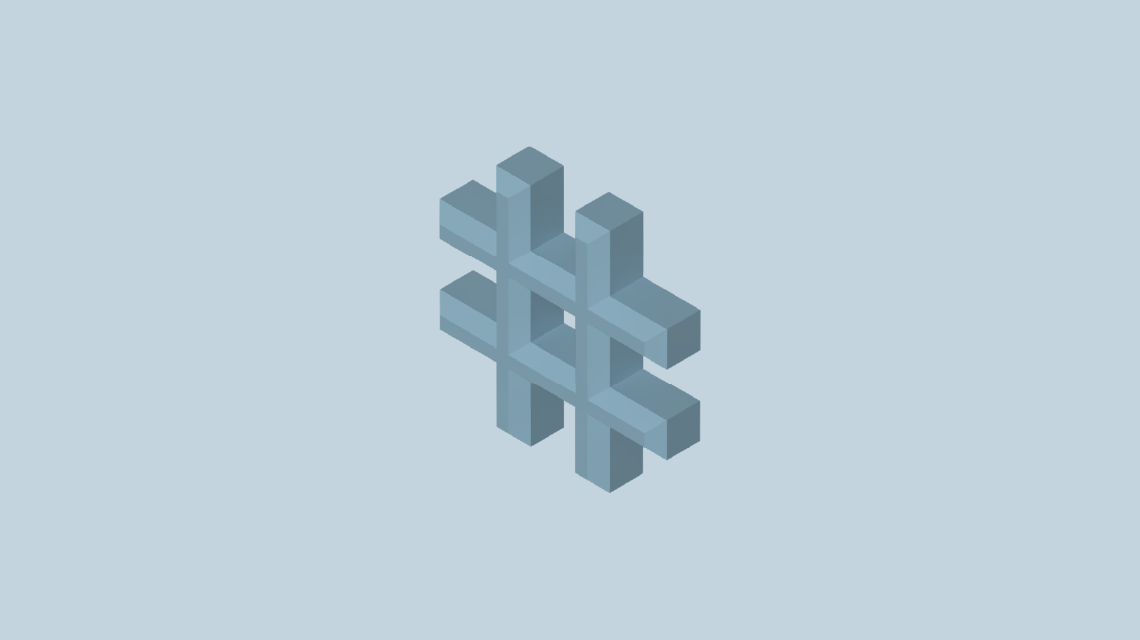 In social media, there are certain unspoken rules that everyone seems to follow. One of those rules is the use of hashtags.

Hashtags are a way to categorize content and make it easier for people to find related content. But adding too many hashtags, or abusing them, can make you look like a spammer.

So, how many hashtags are one too many?

While there are many articles about how many hashtags you should use, very few have actually tried to obtain the answer through scientific means. That’s why, in this post, we will compare different statistics to come up with a scientific answer to this often-asked question. We’ll also look at examples of posts from top social media accounts to see how many hashtags they use.

Before diving into the numbers, let's refresh our knowledge of hashtags and how they work.

A hashtag is a keyword or phrase, without any spaces, preceded by the "#" symbol. In the digital world, it is a way to label content so others can easily find it.

When you use a hashtag, people can click on it and see all the other posts that have used that same hashtag. So it is a great way to find new content and connect with like-minded people.

How do hashtags work?

As mentioned, hashtags are a way to organize content and make it easier for people to find it. When you use a hashtag, your post will show up in a feed of all the other posts that have used a similar hashtag.

For example, if you are a travel blogger and use the hashtag #travel, your post will show up in a feed of all the other posts that have used that hashtag.

Hashtags can also be used as a call to action, such as #FollowFriday or #JoinTheMovement. Here, people are encouraged to do something, such as follow a certain account or join a movement.

The benefits of using hashtags on social media

Whether you are an influencer or a brand looking to reach a new audience, using hashtags can be beneficial.

Here are the top 5 benefits of using hashtags on social media:

Using hashtags on social media can significantly expand your reach and help you connect with a larger audience. Including relevant hashtags in your post can significantly increase the chances of another user finding and engaging with your content.

Hashtags are a great way to connect with like-minded people who share your interests. When you use relevant hashtags, you can find and engage with other users interested in the same topics. In short, it is a great way to build relationships and grow your social media following.

Hashtags can also be used to promote your brand or business on social media. By strategically using popular and relevant hashtags, you can increase the visibility of your posts and attract potential customers. You can also use branded hashtags to encourage users to share content about your brand.

If you include a link to your website in your post, using hashtags can also help to drive traffic to your site. When you use hashtags, more people will see your post. And if they like it, there’s a good chance that they will click through to your site.

Does the number of hashtags matter?

When using hashtags on social media, the old adage of "quality over quantity" definitely applies. While it may be tempting to plaster a dozen or more hashtags onto a post in hopes of reaching a larger audience, using too many can make your message seem spammy and inauthentic.

Here, a point to note is that you can add up to 30 hashtags per post. And according to Later, they work best in most cases.

However, going below 30 (20 to be exact, also produces similar results)

So instead of cramming in as many hashtags as possible, focus on using a few that are highly specific and relevant to your content. For example, if you are posting about your new World Gaming laptop, try hashtags like #gaminglaptop or #worldgaming instead of generic ones like #technology or #newproduct.

Remember that hashtag trends change constantly, so make sure to do some research before hitting that ‘post’ button. Having a handful of high-quality hashtags is much more valuable than an overwhelming number of irrelevant ones.

But how will you know whether your hashtag-using approach is working or not? Here is when quintly comes in. It provides social media analytics with unmatchable accuracy and customization. You can check extensive or layered insights into your social media profiles with a few clicks. If you want to know more about this, book a free demo today!

Here are some examples of how some famous brands or personalities use hashtags on different social media platforms:

Names like Nike and National Geographic utilize this social media platform for marketing their products. Let's see a few of their posts to analyze how they have used hashtags to get better reach and engagement on Instagram.


If we look into the Instagram posts of National Geographic, Nike, and Real Madrid, the sparing use of hashtags is obvious. None of these giant brands have used more than a couple of highly-specific hashtags.

Therefore, exhausting the platform’s limit of 30 hashtags isn’t such a good idea.

Analyzing the Facebook posts from the famous accounts of Samsung, Cristiano Ronaldo, and Real Madrid, you can again see that none have used more than a couple of hashtags in their posts.

Their hashtags are usually highly-specific, so it is evident that generic hashtags are not a good idea for large businesses on Instagram and Facebook.

From the tweets of celebrities like Justin Bieber, Katy Perry, and former US president Barack Obama, it is obvious that none believe in using a lot of hashtags on the platform.

From the TikTok posts of popular accounts such as Charlie D’Amelio, Khabane Lame, and Addison Rae, we can infer that using hashtags in the descriptions isn’t a very popular trend.

Only Khabane has used a couple of hashtags in his videos. As for the rest, none used any.

Looks like Youtubers do not believe in using hashtags at all! Out of the three Youtube accounts, only Pew Die Pie has used a single hashtag in the post description.

Youtube policies allow up to 60 hashtags per post. However, nobody really uses that many hashtags as evident in the posts above.

What the statistics say

Here is what the statistics for each platform say:

According to research conducted by Quintly, the following holds true for Instagram hashtag usage:

However, the study observes some interesting facts about hashtags and mega accounts. Even when such accounts used no hashtags, their interactions were higher when they were using a few hashtags.

So, on Instagram, the number of followers makes more difference than the number of hashtags as evidenced by the screenshots provided above.

According to different resources and experts, the optimal range for Facebook is from 2 to 3 hashtags, but it is not a rule. Even Facebook themselves are telling users to “keep it simple” and use only one or a few hashtags. They further added that using several different hashtags for a single topic can sometimes be confusing for your fans.

A point to note here is that a lot of users have private profiles on Facebook. That's why it becomes challenging to understand how Facebook users are interacting with your hashtags.

Twitter allows you to include hashtags in your tweets, bio, and in your comments while retweeting. On Twitter, you are allowed to use as many hashtags as possible unless they exceed the limit of 280 characters. But that doesn’t mean you should bombard your tweets with hashtags.

Stats show that using 1 to 2 hashtags in one tweet or comment brings the best results for Twitter users. You can search trending hashtags and use them or create new ones.

Here is a breakdown of what using 1 to 2 hashtags can do:

TikTok is a relatively new social media platform, but it has gained immense popularity. It is very different from the other platforms, and that's why it has different rules for hashtags.

Although there is no official limit to using TikTok hashtags, it is recommended to include 3 to 5 hashtags for better results.

You have a caption limit of 300 characters, so you need to consider it while selecting hashtags. When using hashtags on TikTok, be sure to select the ones that are trending and match the niche of your content.

YouTube is the world's second-largest search engine, and Google owns it. Hashtags play an important role in YouTube SEO when used properly. You can use hashtags in your YouTube video titles and descriptions.

According to YouTube's guidelines, they will ignore a video if it has more than 60 hashtags. However, some resources state that using over 15 hashtags in a video will also result in the same response. That's why using 3 to 5 hashtags per video is recommended.

So how many hashtags should you use?

After going through all the information, it is evident that using an optimal number of hashtags per post or story is important. This optimal number depends on the social media platform you are using. For example, on Instagram, using 3 to 5 hashtags is optimal, whereas on Twitter, using 1 to 2 hashtags is best.

In short, adding more hashtags doesn’t necessarily equate to better engagement. On the contrary, it may even affect your post’s reach.

However, you should not take these recommended numbers as gospel truth. Social media algorithms are constantly changing. Who knows, in the near future, Facebook may prioritize posts with multiple hashtags. Or Youtube may disallow hashtags altogether.

Therefore, the key to a successful hashtag strategy is to keep experimenting. Use varying amounts of hashtags in your post and compare them with your engagement. Underneath all those data and numbers, you’ll surely find the most optimal number of hashtags for your social media pages.

Mandy Schmitz is a freelance consultant and project management expert with 10+ years of experience working internationally for big brands in fintech, consumer goods, and more. Join her on Changeaholic.com to learn how to optimize your business operations and find the latest software and hosting reviews.

Mandy Schmitz is a freelance consultant and project management expert with 10+ years of experience working internationally for big brands in fintech, consumer goods, and more. Join her on Changeaholic.com to learn how to optimize your business operations and find the latest software and hosting reviews.