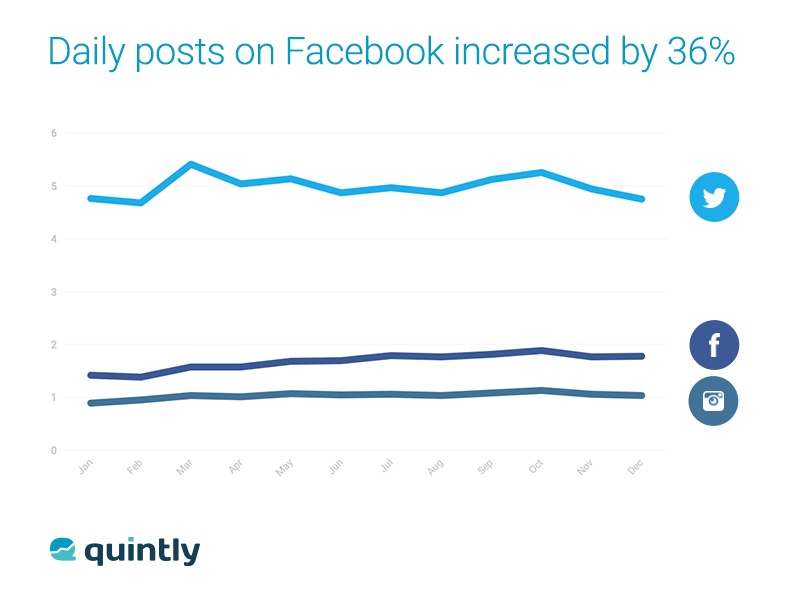 After our social media study of Q2, we now present the social benchmark study of the entire year 2015. The study analyzing over 180,000 profiles on Facebook, Instagram, and Twitter has enabled us to acquire some significant findings from benchmarking different profile size buckets.

Finding #01: Instagram Profiles Growing Fastest
After reaching out to its highest peak in February ’15, Instagram follower growth started to fluctuate down afterwards. On the other hand, Facebook and Twitter have been more or less stable throughout the year. Nevertheless, Instagram holds the highest follower growth among these three social networks.

This finding is mainly driven by the fact that Instagram is still not as saturated as Facebook and Twitter are. The slowing growth is considered to be a normal phenomenon when a network gets mature.

Due to the described fact that Instagram is still on the rise in terms of the number of users and daily posts, it makes sense that businesses ramp up their activities there. On Facebook, the strong increase is a sign that Facebook is far from being "dead". It shows that companies still rely heavily on this network. Having said that, companies in 2015 also increased their activities in this network.

This result qualifies the notion that big social media numbers do not mean big activity. Followers of the smaller profile are more focused and interactive. As the visuals receive the highest engagement , Instagram has been seen to get mature through the declining tendency.

Every social network is different. Therefore, it is important to check out the comparable stats for each of them to find correct business metrics. The study sheds light on the social following, posting, and interaction using the key metrics that will help you to benchmark yourself against the business competition of comparable size. Such analysis provides an extract of social media marketing trends and help you decide investment strategy more accurately and efficiently.

For the sake of ease, we have compared Facebook, Twitter, and Instagram in one place from the perspective of three key metrics. Moreover, we have clustered profiles in different sized groups dependent on their fan or follower counts.

In the above mentioned social networks, pages of the smallest size(1-1k) gained the followers faster. Increasing profile sizes showed a negative correlation with fans change rate in case of Facebook and Twitter while the largest Instagram profiles gained more than 2x followers during 2015. Surprisingly, Instagram profiles with the larger amount of fans/followers show a decreasing interaction rate which means increasing followers could not drive expected engagement. Nevertheless, it is important to note that although daily posts are less frequent on Instagram, its higher follower growth is leading to increased engagement rate in contrast to Facebook and Twitter. Ascending percentage of daily post on Facebook could not fetch that much interaction for larger fan pages like 100k-1m, 1m-10m or 10m+.

Regarding social media marketing, marketers prefer to rely more on Facebook probably due to its larger user base or better targeting for businesses. Fair enough - massive audience and lower marketing cost have expanded the possibilities of this social network for businesses. But the time is now to keep an eye on the potential of other relevant social networking sites while continue to be active in the present ones with a detailed strategy.

Marketing is now more an data-driven discipline. Successful brands are researching customer data to drive marketing decisions, where social benchmarking is part of. Therefore, it is necessary for every business to validate why they are relying more on one network than the other. In this study we showed that businesses ramped up their activities on Instagram and even more on Facebook during 2015. What is the best social network for you to post in?