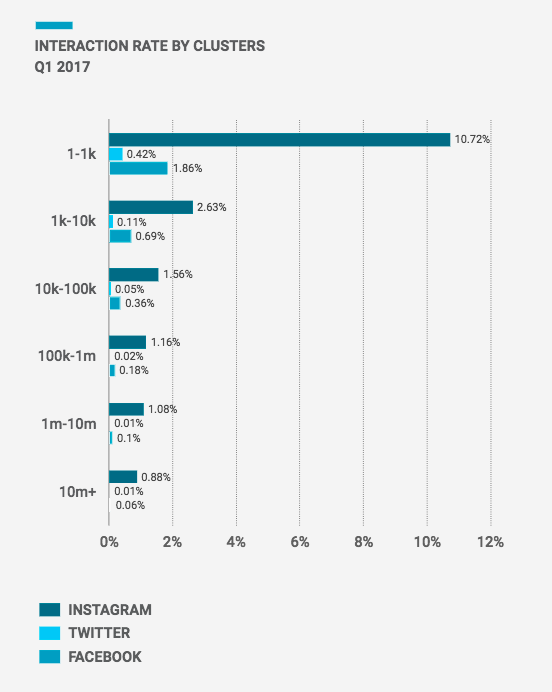 Setting goals for a social media strategy is important, but adapting the strategy to the previous performance and to the evolution of each network is essential. For the following study, we have analyzed 740,000 social media accounts on Facebook, Twitter and Instagram. To make it easier to apply the findings to specific cases that marketers might encounter, we look at social media data by profile size clusters. Overall, we aim to show general social media trends regarding the three most important networks. But now let’s talk numbers!

When we look at the Follower Growth Rate (taking the average number of followers at the beginning of the month as well as at the end, into account), it is obvious that Instagram is keeping its sweet spot with the highest rate, by far. However, in our last benchmark study we could see that Instagram’s rate was decreasing in August, but it is now back up. This shows that ongoing growth cannot necessarily be taken for granted. However, overall it can be observed that Instagram still seems to feel engaging and fresh enough to many people, as growth rates remain high. With it being around for some time now and having become a member of the Facebook family, it has also become much more of a “must have” network where you want to be because most of your friends are active on there as well.

Also, something has significantly changed since our Benchmark Study Q3 2016: Facebook’s rate has remarkably grown, while Twitter’s has remained stable, which means that it has now the lower Follower Growth Rate. This is key information for your social media strategy: maybe you should put more energy in Facebook than Twitter as it is a better network than Twitter in terms of Follower Growth at the moment.

However, Instagram is definitely the network you need to use at the moment if you have interesting and engaging visual content to share with your audience, and if you want to extend your community. When doing so, remind that the users on Instagram are a young crowd - 41% of them are younger than 25 years old. Also, for your strategy to be a success, you absolutely have to pick the right KPIs to measure your content. These will help you keep your strategy clearly laid out in order to ensure good results.

With this new analysis, we can see that Twitter is still the network of rush and instantness as the users post an average of 4,5 posts a day. Indeed, the flow of content on this network is still so important that if you want your audience to see you in their timeline, you have to post more than on the other networks. But we can also see in one of our earlier Twitter studies that this number of posts is actually a usual number as it was the same in 2015.

However, there is a large difference between the number of daily posts for small and big profiles on Facebook and Twitter compared to Instagram. Profiles having more than 10 millions followers on Facebook post around 10 times a day than accounts having between one and 1K followers. For Twitter, it is 13 times more, meanwhile it is only 2 times more on Instagram. This might be a hint that on the “older” networks (Facebook and Twitter), there might be a higher grade of automatization in case of large profiles. For the three networks, we can see a very slight overall growth in January, and a stabilization in February. So it can be observed that there are not any big changes in posting behavior happening in Q1 2017.

It has now been the case for a while: Instagram has the best Interaction Rate by far, especially for the accounts having less than 1000 followers. This is a great information for marketers whose campaigns have the objective to get a high amount of interactions. Considering this data, however, it seems likely that smaller profiles in terms of followers are more casually tended by the users. At the same time, most followers probably have a higher number of followers they actually know in person and might be much more open to interacting with their friends. So, while analyzing your Instagram performance always see yourself in comparison to other pages, but be aware of the given differences here.

Looking back at the last months and years, we at quintly have conducted several studies researching specific formats on social media and single networks while our benchmark studies reach across different networks. They uncover available data and structure it to make general trends visible. The results lead to valuable insights that you can use for optimizing your overall social media performance. For the second half of 2017, it will remain interesting to observe if Instagram will keep up its good stats and fast growth.

If you have any questions or comments about our latest studies, feel free to comment on it. You can also send us a Tweet or message us on Facebook.