In the past, it was always interesting for quintly to conduct studies that illuminate industries or even look at some of the biggest brands worldwide on social media. This study, in contrast to our previous studies, follows a different approach and focus on social media in Mexico.

Mexico, America's neighbor to the south, is a huge market with a strong social media landscape. Facebook, as in almost every other country, dominates the Mexican social market. Therefore, we chose to solely analyze Mexican Facebook brand profiles and not include Twitter or Instagram.

We took a look at the “Top 50 Most Valuable Latin American Brands” brands study by Millward Brown and picked out ten of the major brands in Mexico. Our picks represent the variety and the large expanse of the Mexican social media landscape. Through this approach, it is possible to convey a broad view of different industries. Furthermore, we are able to provide, through a broader approach, more insights on social media in Mexico, the use of Facebook by the various brands, and as well as give further information on how they communicate with their fans.

The companies that were included in this study are the retail companies “Liverpool”, “OXXO”, “Bodega Aurrera” and “Sanborns”, the communication providers “Telcel” and “Telmex”, the food companies “Grupo Bimbo” and “Marinela” and the financial service, “Inbursa Gfi” and the building material company "Cemex".

Now that we’ve revealed how the data was gathered and approached, it is now time for the actual figures.

Discussing the number of Fans is always the first KPI every marketer is interested in, and for this study, it is inevitable that we take a closer look at this metric.

The average fan count is the first topic that was covered in this study on social media in Mexico. By taking a look at the average number of fans in July 2016, the brands had an average of 1,525,633 fans. Over the upcoming months, this number increased to exactly 1,797,176 fans on average per profile. This is an increase of 17.8% on average.

This growth likely indicates that Facebook is still attractive for brands in Mexico, since the platform provides them the chance to reach a new target audience on the social network.

To provide more details on a profile level, the page with the most Facebook fans is “Bodega Aurrera”. Their Facebook page counted 4,953,508 fans, followed by the telecommunication provider “Telcel” at 4,141,690. All values are taken from December 31st, 2016. Access the full study to get further information on how the analyzed brands utilize Facebook for their social media strategy.

When looking at the amount of own posts published, there is one thing clearly visible: that the post frequency fluctuates over the six months period. While June and November were strong months post-wise, it declined to a lower amount of posts in August - but not to a worrying low amount of own posts. 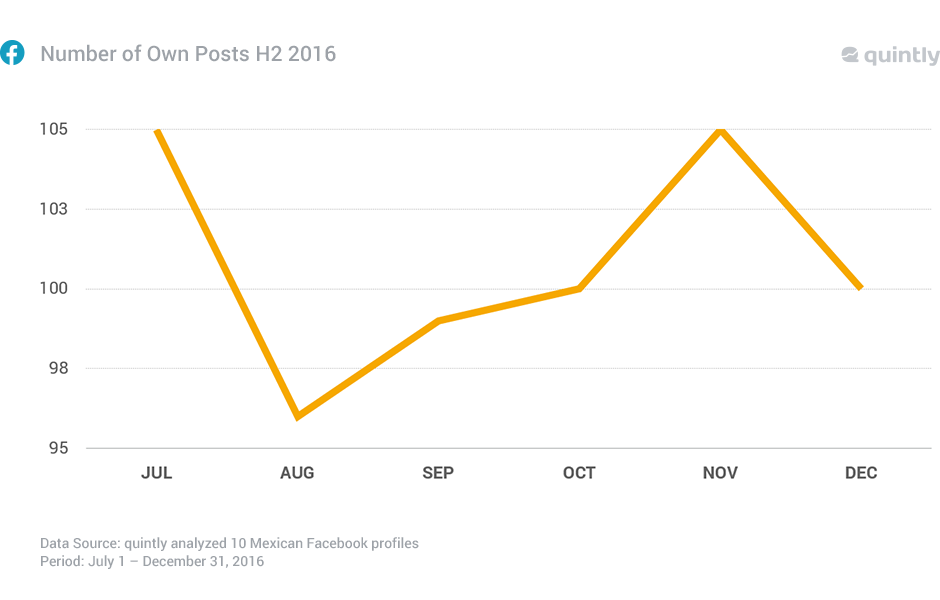 Providing a more specific insight on the post behavior, it is also necessary to reveal the brands that created the most posts in this time range. The Mexican telecom provider, Telcel, had the highest post count in the analyzed period at 2,582 posts.

Besides the huge amount of posts that were made by Telcel, they did not manage to publish the post that garnered the most reactions. The most successful post in terms of reactions (like, love, angry, wow, haha and sad) was created by the retail company, Bodega Aurrea.

This post received more reactions than any of the other 4,500+ analyzed posts. With its 270,415 reactions in total, this post stand out by far. It received 260,050 likes, 8,782 love, followed by 711 times sad, 210 haha , 133 wow and 19 angry. For reference, the second most liked post was also made by Bodega Azrrea and received 171,067 reactions. Another interesting takeaway we can gather from this is: since the introduction of Facebook reactions people are still not keen to making use of them and still to prefer to hit the like button instead of using the love or haha button, for example.

In one of quintly’s previous studies, it was revealed that video content stirs more interaction than an image. Video post also has further additional benefits besides the higher amount of interactions. Videos can allow for a longer engagement with the user because the time of consuming a video is in general longer than taking a look at a picture - which is only perceived for a moment.

Let's see if social media in Mexico works in a different way. It is quite interesting to see that the analyzed Mexican brands did not follow this trend, beside one exception, and still predominantly prefer images to videos as their favorite post type. On average, the amount of image posts is 63%, while videos only hold a share of 37%. 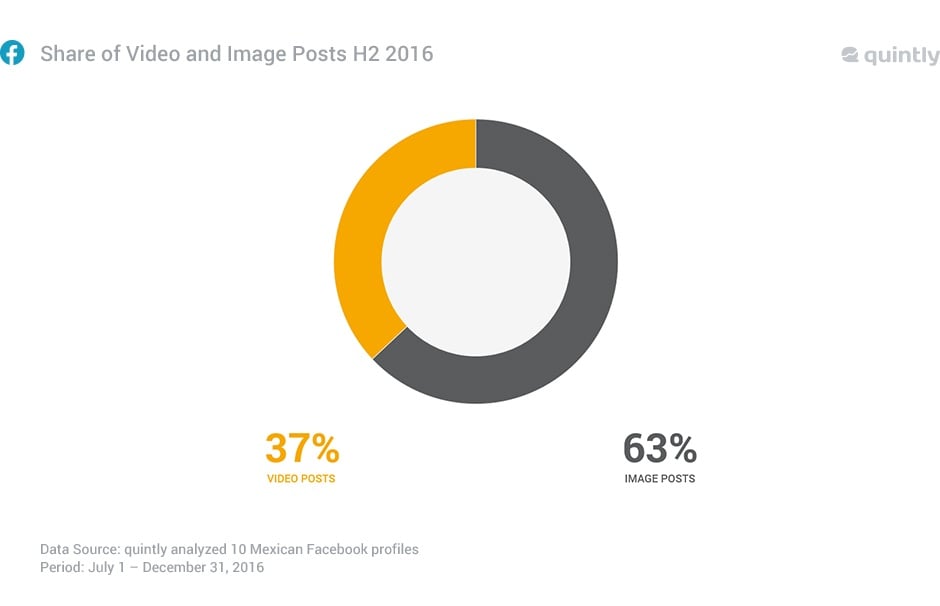 Now it is interesting to dig deeper into the analysis of the single brands and their posting approach. Let’s start with the aforementioned exception: Telcel’s social media strategy is completely different from the approach of the other profiles. From July to December 2016, they published 2,582 posts in total, of which 1,472 were videos and only 522 were photos. All the other analyzed brands in Mexico were less likely to post videos on the brand page. Second most video posts were created by Sanborns - 94 times - and in third place was Liverpool with 88 videos.

We can take from this that not all brands in Mexico are keen to implementing videos yet to their social media strategy, but doesn’t mean that there won’t be a change in their behavior soon.

Now that we’ve gone over a bunch of findings in this social media in Mexico study, it’s time for a recap. In the beginning, a positive trend in fans was detected and an increase of the average amount of 271,543 fans for all analyzed profiles was discovered. This is already a strong sign, not only for the Mexican market, but also for the whole network. Facebook is not saturated yet. The next chapter handled the topic of own posts, and revealed that the amount of own posts fluctuated over the months but never dropped in a dramatic matter.

Last but not least, the study analyzed the share of video and image posts. A higher share of image posts was apparent, but one brand, Telcel, seems to be following the latest social media trends by focusing on video content.