US elections on social media: Trump still leading, but for better or worse?

The National Conventions are over, which means Hillary Clinton and Donald Trump are official nominees of their parties and we are now less than three months away from election day. Since our last analysis in the beginning of July, Clinton has again improved her polling results. According to RealClearPolitics, she is currently leading 7.2% over Trump (August 8, 2016). However, if looking at Clinton’s social media stats on both Facebook and Twitter, she is still clearly behind her competitor. Let’s see if she could also improve in the social networks or if Trump stays unreachable.

Who has the largest fan base?

When we look at the fan base of the two candidates, we can see that Trump maintains a big lead over Clinton. He accumulates 56.7% percent of their follower base on Twitter, while he can even manage to gather around 65.7% percent of the fans on Facebook. Comparing these relative numbers to the month before, Trump has lost 1.2% of his fans in relation to their combined total fans on Facebook. On Twitter, there has been no change. From June to July 2016, she has also been able to catch up a little on the microblogging service. According to these findings, Hillary Clinton is again able to slightly gain ground on Facebook. Nonetheless, the gap between them is still large.

Who can win more people over?

Within the month of July 2016, Donald Trump has been able to gather 1,525,289 new fans on Facebook, while Hillary Clinton increased her fan count by 1,029,386. Respectively, the republican reached 1,086,804 and the former secretary of state gathered 830,288 new followers on Twitter. Compared to June, both of them had a much larger fan increase on Facebook. This is most probably due to the National Conventions where the candidates were officially nominated. If you look at the graphs below, you can clearly see a steep bump around the time of the conventions.

Who achieves the most interactions?

In a political campaign, communication with the voters is key. In social media, it is important to sustain a high level of interaction on your posts or tweets in order to create a dialogue with the followers. The term interactions describes the total number of comments, likes and shares on Facebook and the sum of all retweets, likes and replies on Twitter. Yet again, Clinton is lagging behind Trump. She only achieved to surpass him on Facebook at the end of the Democratic National Convention. Her overall most successful post in terms of the total number of interactions was the one below, showing her hugging President Obama.

Trump’s most successful post in terms of interaction was his statement on the accusations against his wife of having plagiarized a speech by the First Lady Michelle Obama. Counting together all likes, comments and shares this post gathered more than one million interactions up until mid August 2016.

On Twitter, things look different for Hillary Clinton. Within the month of July 2016, she never managed to reach better numbers than her rival. Her tweet with the most interactions was a retweet of this statement from President Obama:

Great speech. She's tested. She's ready. She never quits. That's why Hillary should be our next @POTUS. (She'll get the Twitter handle, too)

Setting up a hashtag on Twitter for political slogans and candidates has become an almost natural act. The same holds true for events like conventions or debates. It is no surprise that the hashtags for the national conventions were the most successful in July 2016. Four out of the five hashtags that received the most interactions came from Donald Trump. Accordingly, his signature slogans like “America First”, “Crooked Hillary” and “Make America Great Again” are still performing strongly. 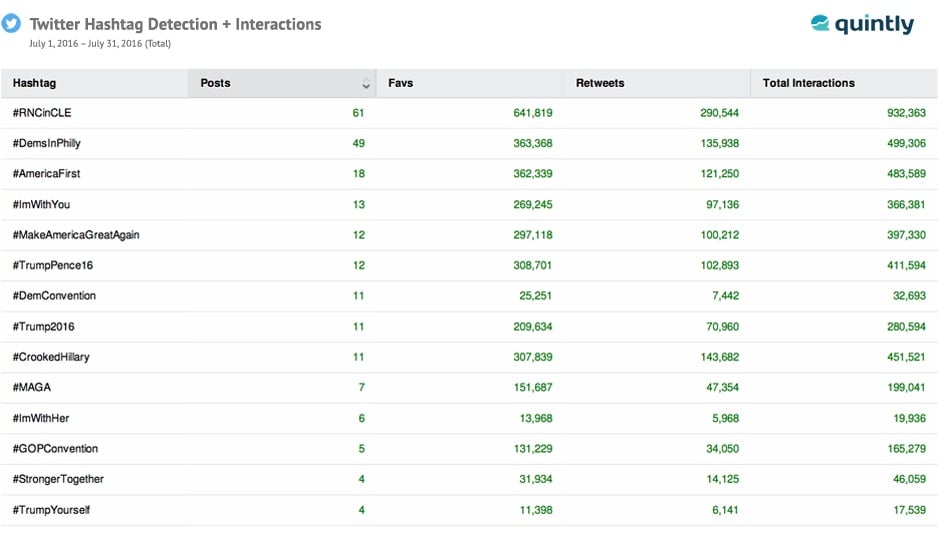 Facebook’s advertising revenue is soaring and besides companies, parties and politicians also use this service to promote their agenda. This is why we have launched a state of the art machine learning process that helps detect sponsored content with an accuracy of 96%. According to our sponsored post detection, it seems like Hillary Clinton is now promoting almost all of her posts on Facebook. She is continuing to rely more on paid content as she has already increased her share by 15% from May to June 2016 . Nevertheless, the same holds true for Donald Trump. While he used less than 20% of sponsored content in May, his share has increased to more than 50% in July. Accordingly, it is clearly visible that both candidates significantly ramp up their Facebook advertising as election day is now less than three months away.

To allocate financial resources efficiently in a campaign, it is important to always think of which is the most preferred network among the audience and which also suits your purpose. As shown below, the interaction rate for the combined data of both nominees is consistently higher on Facebook than on Twitter. Facebook might thus be the better choice in case you want to create more of a dialogue through interactions. This has not changed in the course of the last months and is probably also largely due to how these networks function in different ways.

Trump leading on social media, Clinton leading in the polls

Considering the sheer numbers from July 2016, one thing seems rather clear: Trump remains pretty much unbeatable on social media. He is leading over the democratic camp in almost every aspect during the whole observed month. However, the beginning of August 2016 has been considered as a low point for the real estate billionaire. His negative statements regarding a crying baby at one of his rallies and against the muslim background of a fallen soldier’s parents were followed by a bounce in his polls. The Guardian saw more than a terrible week for Trump but a turning point for the worse. The Washington Post called it an “absolutely horrendous week”. This shows that a strong performance on social media might lead to a higher degree of attention, but the overall outcome for a campaign won’t necessarily be positive. Social media has become a firm part of any political communication strategy, but it has always to be seen as an element. Get the rest right and it might boost your success, but get the rest wrong and social media might just make it worse.